Posted on January 9, 2019 by carolinehelbig 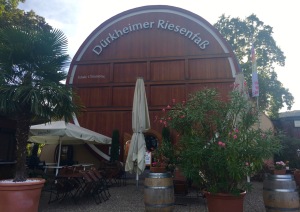 “You have no reservations!” exclaims the friendly women at the Neustadt an der Weinstraße tourist information centre. “You realize that Germany’s largest wine festivals are taking place along the Deutsche Weinstraße (German Wine Road) right now. There’s a giant parade here in Neustadt on the weekend for the crowning of Germany’s Wine Queen.” She sees the overwhelmed looks on our faces, arms us with information and brochures and gently recommends that we head to the town square where we can figure out what to do over a nice kaffee und kuchen. 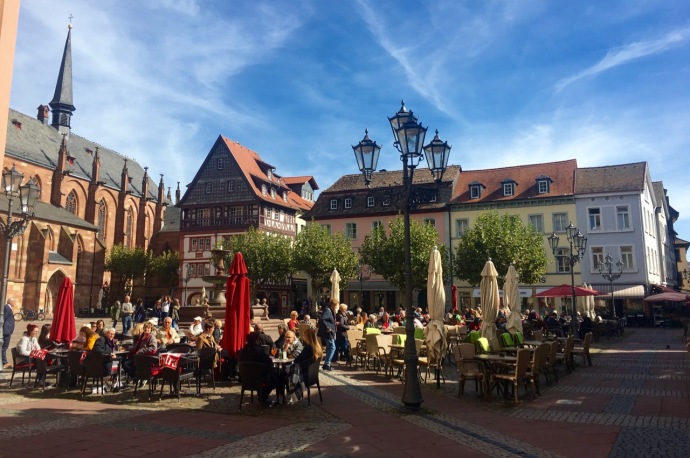 Indeed, the kaffee und kuchen calm me, as does the gorgeous café-lined square that is brimming with folks enjoying the sun on this warm late-September day. Neustadt an der Weinstraße is the epicentre of the Deutsche Weinstraße, the oldest of Germany’s tourist wine routes. The Wine Road, in the Pfalz (Palatinate) region, runs 85 km from Bockenheim to Schweigen-Rechtenbach at the French border. It’s popular with German visitors but doesn’t attract nearly as many international tourists as wine regions like the Rhine and Mosel. For cyclists, this area is a dream, with miles of paved paths that run through vineyards and charming towns. 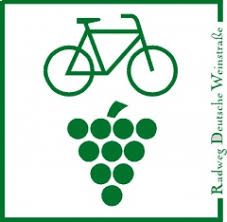 My phone calls fail to secure reservations for the night. We place our bets on a message I’ve left at a guesthouse in the small village of Weisenheim am Berg about 35 km north of Neustadt. We find the well-signed Wine Route with its distinctive grape and bike design. It quickly gets us onto a quiet vineyard path. Every few kilometers, the  path dumps us out into another cute town—Mußbach, Deidesheim, Forst, Wackenheim, Bad Dürkheim. The latter hosts the world’s largest annual wine festival and boosts the world’s largest wine barrel. 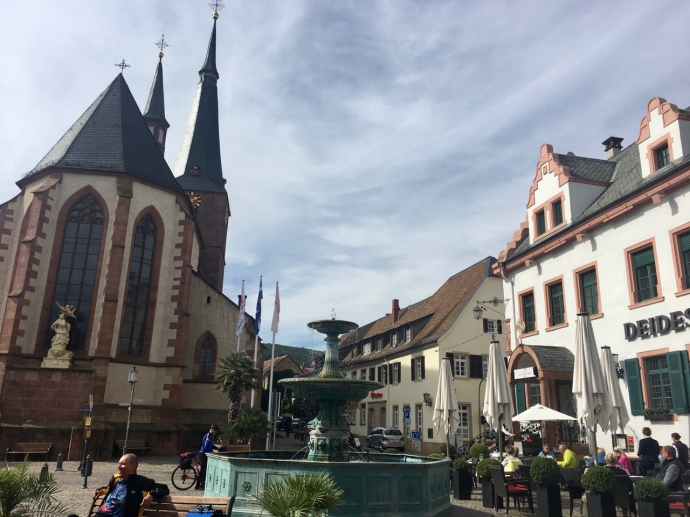 Pretty town of Deidesheim along the Deutsche Weinstraße 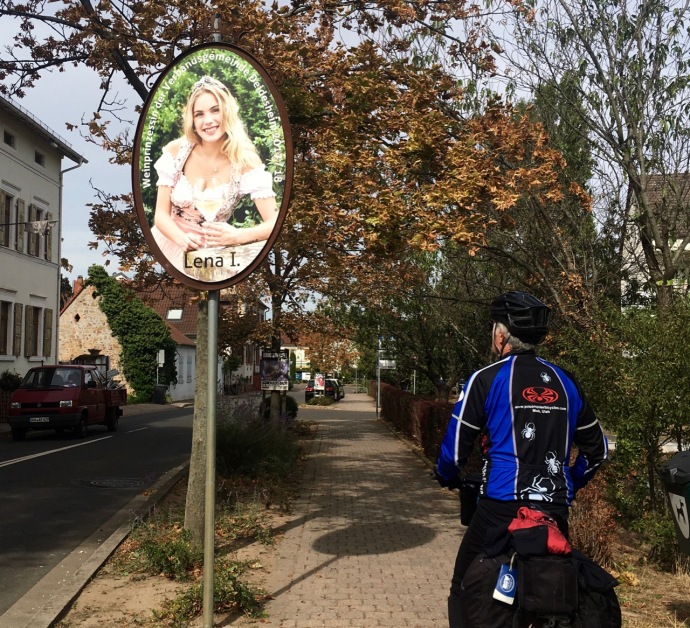 Mike admiring one of the local wine princesses 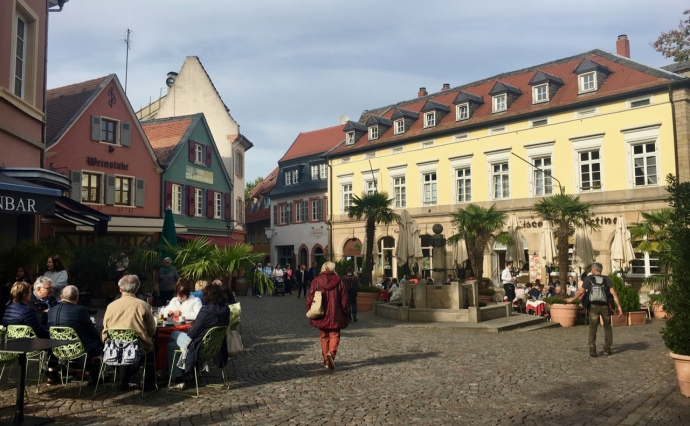 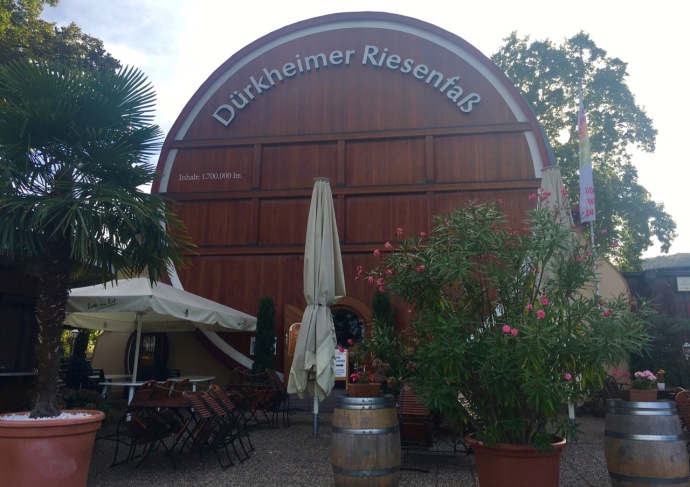 As we stare at the giant barrel my phone rings. Bingo! We’ve found a room for the night. It’s not a total surprise that the route to our guesthouse in Weisenheim am Berg is uphill (berg means mountain in German). 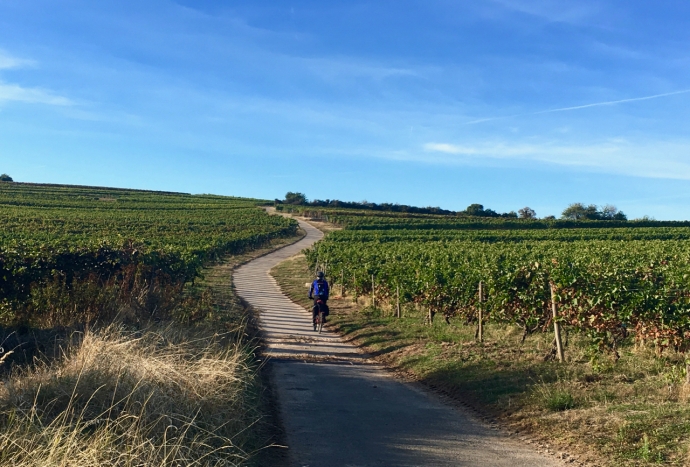 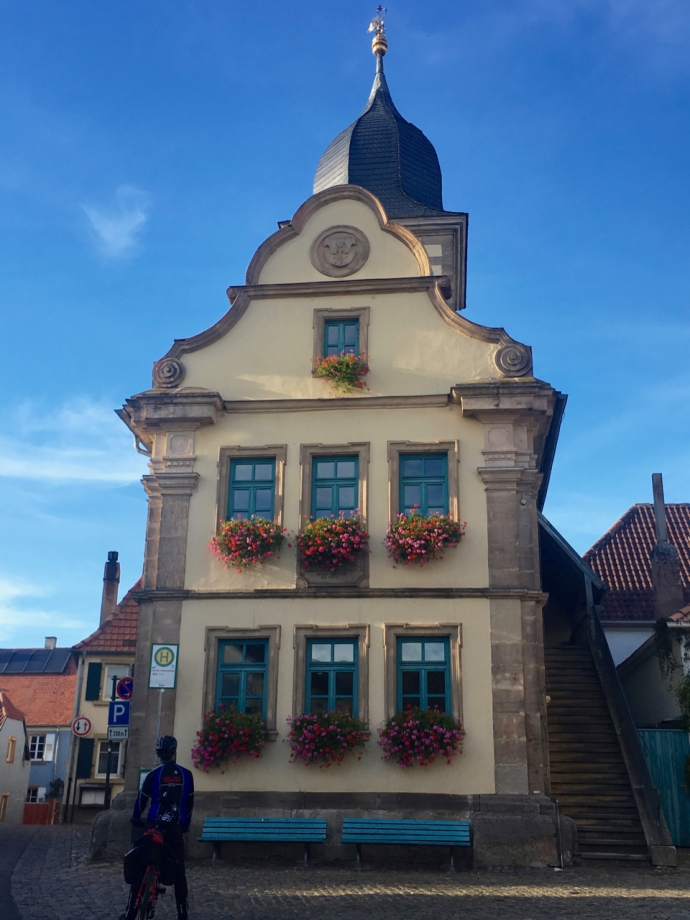 The lovely town hall in Leistadt, enroute to Weisenheim am Berg

As soon as we check in to the Alter Winzerhof, Andrea, the owner, asks whether we’d like to participate in a wine tasting that her husband, Harold, is leading for two other guests. We dash to our room, change out of our bike gear and are in the guesthouse’s ancient wine cellar five minutes later. For three hours, over many glasses of wine, Harold captivates us with interesting facts and stories about everything wine.  Halfway through, Andrea serves a delicious, traditional dinner of bratwurst, sauerkraut, leberknödel (liver dumplings) and local specialty saumagen (sow’s stomach). That last one—a pig’s stomach casing stuffed with ground pork, onions, potatoes and all kinds of spices and seeds— tastes much better than it sounds (Mike doesn’t agree).  Apparently, Helmut Kohl, Germany’s chancellor from 1982-1998, was very fond of this dish and regularly served it to guests like Bill Clinton, Margaret Thatcher and Mikhail Gorbachev. 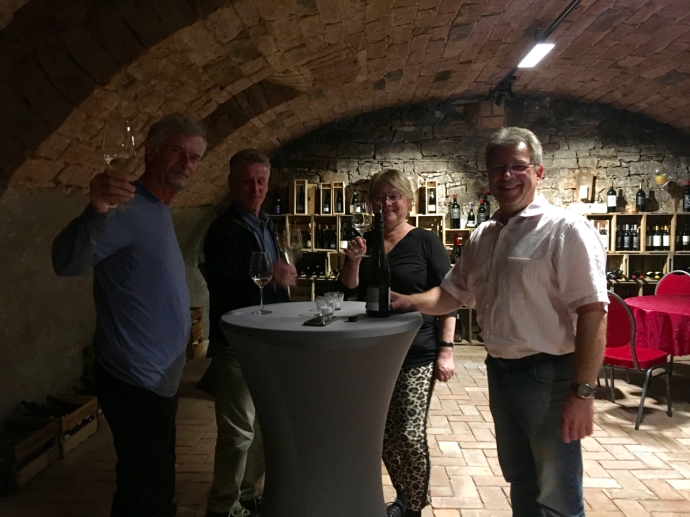 Wine tasting in Weisenheim am Berg

At the wine tasting, someone lets it slip that Donald Trump’s ancestors are from this area—a fact that locals and his relatives keep quiet about. Coincidentally, as we ride through the tiny village of Freinsheim the next day, we spy the Bäkerei Trump. According to a New York Times article the bakery is owned by Ursula Trump, whose husband is the president’s seventh cousin.  The amusing article goes on to recount how Ursula’s neighbours boycotted her bakery when she jokingly decorated her spongecakes in stars and stripes and edible pictures of Trump. She no longer makes those cakes. 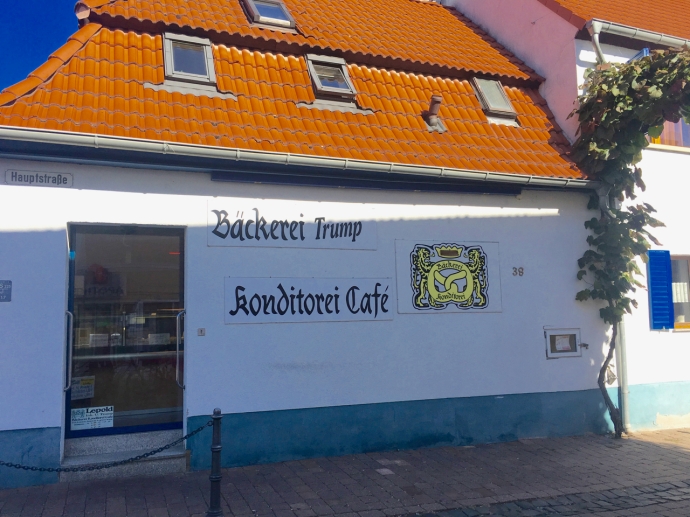 Bakery owned by a Trump relative

Freinsheim is one of the prettiest villages we’ve visited. Its 15th century Gothic town wall is almost wholly intact and its pastel coloured houses are draped with grape-laden vines.

The beautiful walled town of Freinsheim

We spend the afternoon immersing ourselves in history lessons at the Hambacher Schloss—a castle that was the scene of the 1832 Hambacher Fest (Hambach Festival), an important political rally disguised as a county fair. Disillusioned by the government’s restrictive policies and increased censorship, as many as 20-30,000 people took part, calling for freedom and democracy. The castle is considered a symbol of the German democracy movement.

The next day we explore the area south of Neustadt where we ride the undulating vineyard paths between more sweet towns. The village of Rhodt unter Rietburg has been making wine for over 1200 years. It’s impossibly cute and has some really nice- looking restaurants and guesthouses. The scenery around Gleisweiller, Birkweiler and Klingenmünster is spectacular—vineyards stretch up to forested hills peppered with castle ruins. 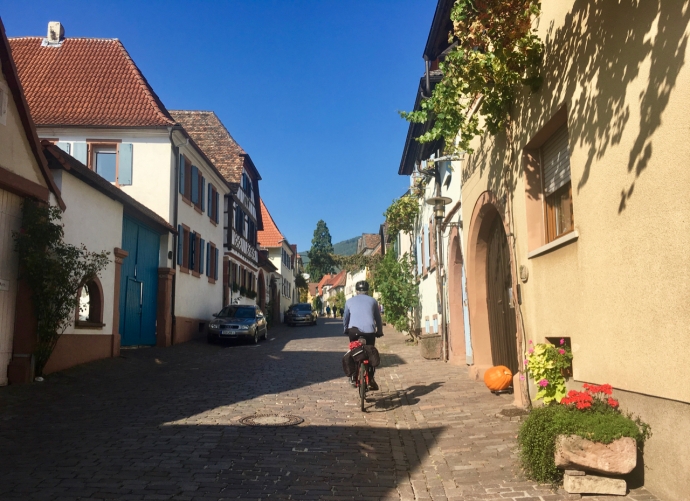 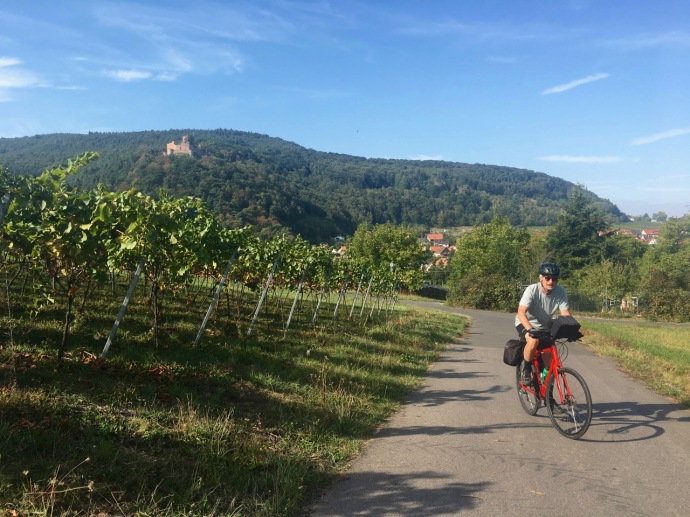 Conquering a hilly section near Klingenmünster

Late in the afternoon, as I’m starting to get panicky about where to stay, we ride into pint-sized Oberotterbach. There’s a wine festival just getting underway. I decide that this is where I want to stay. A vendor at one of the wine booths directs us to an electronic accommodations board that indicates vacancy via red and green lights. There are five green lights on the board. Three don’t answer my calls and one has no vacancy. On the last try, success— a last minute cancellation. 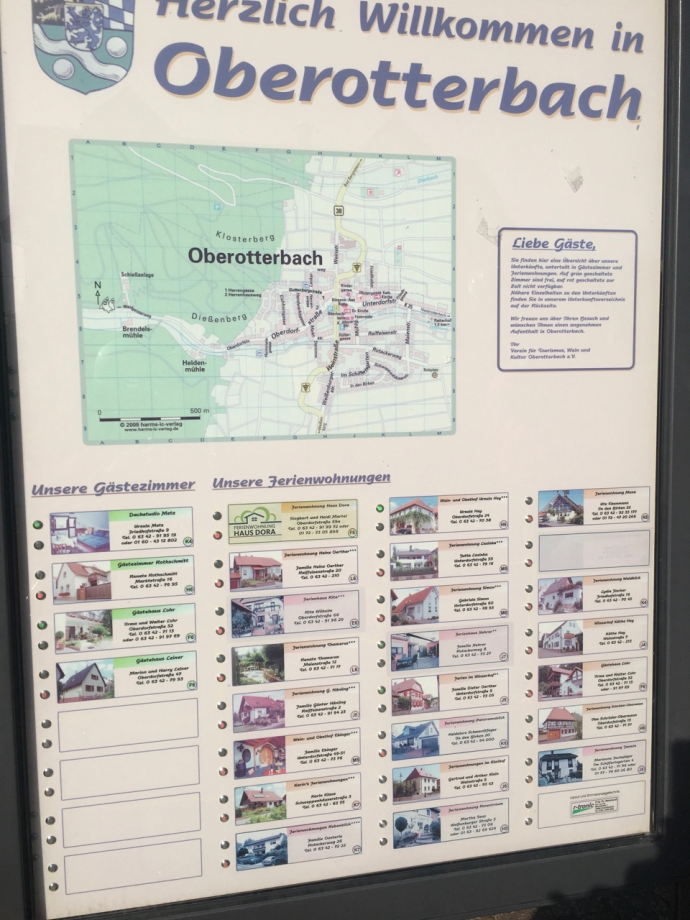 The guesthouse board in Oberotterbach

Our host for the night is the charmingly eccentric Ursula Metz. She rents out a large, whimsically decorated room on the top floor of her house. I love it. We have a fun evening drinking more wine, dancing to schmaltzy German music, eating heaps of potato salad and chatting with revellers who are shocked that a couple of Canadians on bikes are hanging out at this very local wine festival. 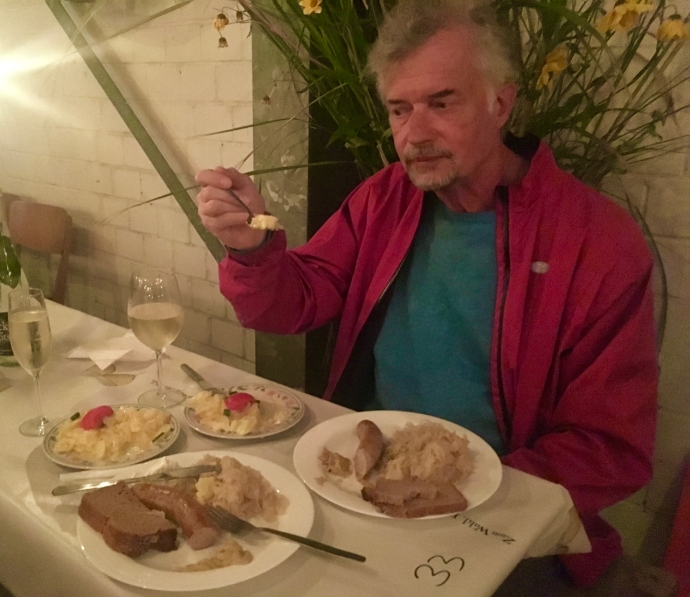 Mike enjoying the fare at the Oberotterbach wine festival

The next morning, Frau Metz delivers a room service breakfast that is nothing short of a masterpiece.

Luck has been on our side as we improvised our way through the fascinating Deutsche Weinstraße. Fortified by our killer breakfast, we look forward to slipping into France, just 7 km away, and continuing our journey through the famous Alsace wine country. 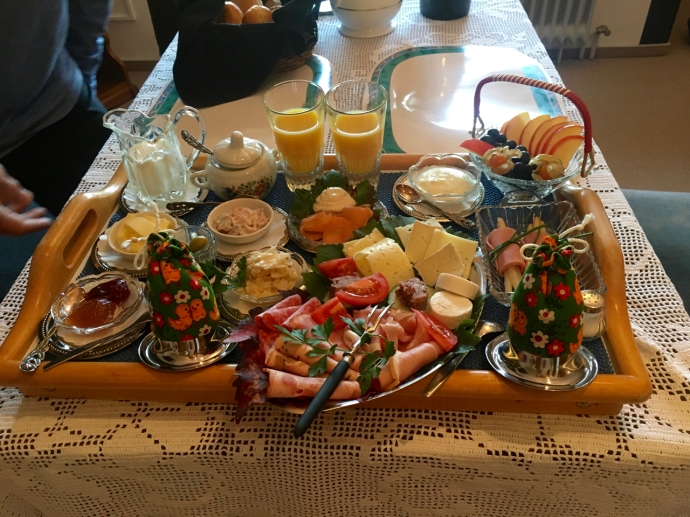 This wins the prize for the most beautifully presented breakfast

For those who want more cycling details: 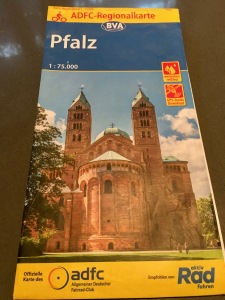