At the Nong Khiaw viewpoint—C.Helbig

If you only do one activity while visiting Nong Khiaw (other than lying in a hammock admiring the view) it should be hiking to Phadeng Peak viewpoint. I heard lots of excuses for not doing it: it’s too hot, cold, difficult, steep, early, late…Mike used a combination of these to talk himself out of the hike. I remember the regretful look on his face when he scrolled through my photos. He hadn’t expected the views to be that stunning (nor had I). Don’t miss out on this activity when you’re in Nong Khiaw. It’s well worth the roughly one hour uphill grunt, and the effort needed is not nearly as bad as many reviewers make it out to be.

I only had a small window of opportunity for the hike—early morning, as we were catching the 11 a.m. boat to Muang Ngoi that day. When my phone alarm went off at 6:30 I was starting to talk myself out of it: Do I have enough time? Should I be doing this on my own? I tried convincing Mike one more time but he wouldn’t budge. Something pushed me on, and off I went to fill up my water bottle and grab a banana from the breakfast buffet.

Early morning in Nong Khiaw is not terribly appealing. It’s cool and damp and foggy (in February anyway). However, there are at least a couple of reasons why this may be the the best time to hike to the viewpoint. The comfortable temperature and absence of scalding sun makes the uphill slog quite bearable versus waiting until later in the day. But the best part is the mystical view at the top where the mountain peaks are bathed in clear morning light and the valley floor is blanketed in clouds. 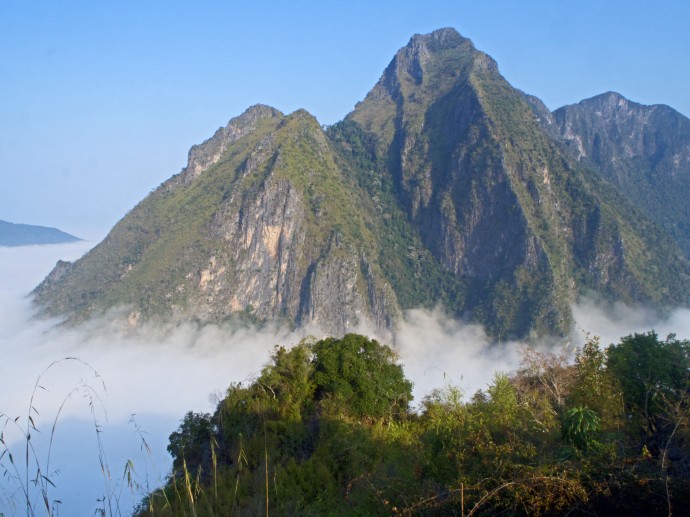 The rewards of getting up early—C.Helbig

The trailhead is located on the east side of Nong Khiaw along the main road and is well marked with signs. It’s a short walk from the bridge and not far beyond Deen’s Restaurant heading out of town. The signs indicate that the hike takes 1 1/2 hours going up and 45 minutes down. If you’re reasonably fit it shouldn’t take more than an hour to reach the top. The trail is steep but very doable. There’s nothing technical, and the path is well maintained and easy to follow (it would be almost impossible to get lost).

It’s hard to miss the trailhead for the Phadeng Peak viewpoint—C.Helbig

There’s a house at the start of the trail where you buy your ticket (20,000 Kip/$2.50). The sign claims that admission includes a bottle of water but they had apparently run out. Bring your own water; you’ll need it. 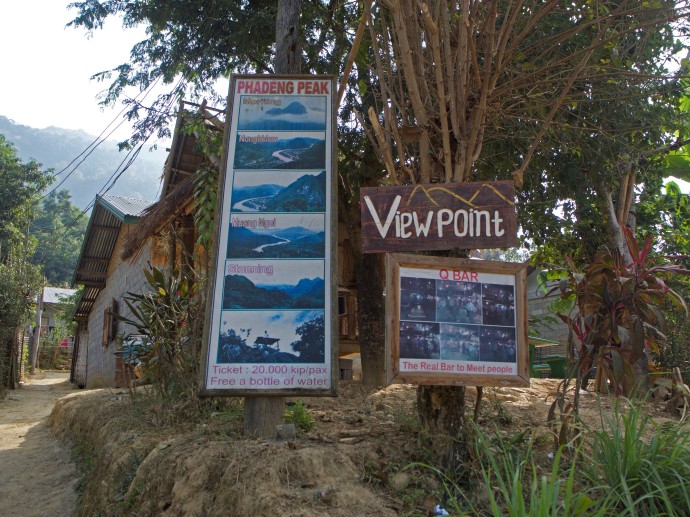 The path winds its way past a few houses and then quickly gets into the jungle where the hard-packed dirt trail goes relentlessly uphill. In a few particularly steep sections there are ropes that provide assistance (I needed them more on the way down). I was in such a rush to get up and then down again (after spending maximum time at the top) that I didn’t fully appreciate the journey and only took a few (bad) photos.

The jungle scenery is quite impressive with thick, ropy vines and massive bamboo stands. The trail was quiet and I didn’t run into other hikers until at least three quarters of the way up. I had lots of time to think and obsess about giant Burmese pythons…do they cross the border!?

Bamboo forest on trail to viewpoint—C.Helbig

Beautiful twisted vines along the trail—C.Helbig

There are really no views to speak of until you get to the very top, and then they are beyond stunning. The sharp peaks are a dramatic contrast to the fluffy white clouds that obscure the valley. I felt like I was on top of the world, in all kinds of ways.

There’s a covered platform that invites hikers to linger. It’s the perfect spot to relax and stretch and drink in the beauty.  I was very surprised to be sharing this wonderful place with only three others. 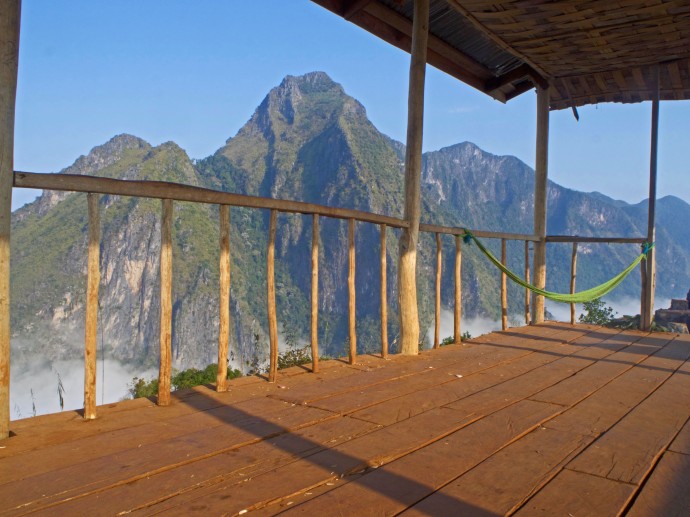 A sunny, comfortable place to relax—C.Helbig

The photo ops are endless—C.Helbig 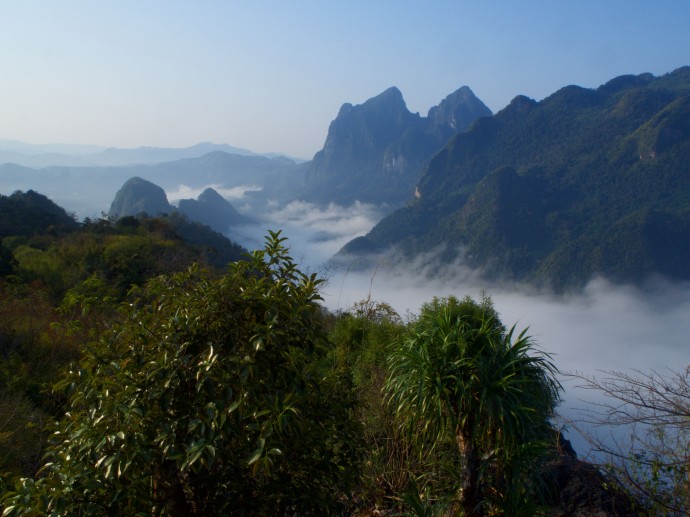 I was told that the clouds usually lift by 9:00 a.m. I figured that I could stay at the top until 9:15 and have enough time to make it down, have a quick breakfast, and get to the boat launch before 11:00. I was desperate to see the view of the town and the Nam Ou river valley, but by 9:15 there were only a few tiny breaks in the cloud carpet. I stretched it out a little longer thinking I could run most of the way down (which I did). By 9:30 I had to pack it in. I learned from the gal in the photo (two up), who I bumped into in Muang Ngoi, that the clouds didn’t lift until after 10:00. Despite missing out on the “open” view I was 100% thrilled with the mystical cloud cover view. The hike to Phadeng Peak was one of my favourite activities of the entire trip.

In case your wondering about the view once the clouds lift, here’s a photo I “borrowed”.

I made it to the boat, and I apologize to fellow passengers that I had no time to take a shower.

I have a couple more posts coming on our adventures in Nong Khiaw and Muang Ngoi.