In the heart of Islamic Cairo, deep in the maze of narrow passages of Khan el-Khalili bazaar, El Fishawy Cafe has been serving tea, coffee, and sheesha to locals and travelers for over two centuries.

We had been mosque viewing, trinket bargaining, and death-by-Cairo-traffic evading for most of the day. We were tired and needed a break. I had read about El Fishawy, one of the longest running coffee and smoke shops in the world, and was determined to lead my family to Cairo’s most famous cafe.

If you’re without a guide, be prepared to get lost in the confusion of “The Khan”—a labyrinth of narrow passageways with small shops selling everything from tacky souvenirs to home hardware. It’s all part of the experience and you’ll find that Cairenes are friendly, helpful folks. You’ll likely need to ask a few of them for directions before you finally find El Fishawy.

We were there midweek and it was crowded. Apparently it’s always this way. No problem, in a city of over nine million, locals are adept at squeezing in. With a few strategic rearrangements, the waiter secured a bench for us in the bustling alley that serves as an extension of the cafe.

Despite the seeming confusion, another waiter quickly arrived to take our order. All around us, men and women—young and old—were puffing on sheesha, the term used in Egypt for the hookah (an ornate instrument for smoking flavoured tobacco). With some help from the neighbouring table, we decided on the mango flavoured sheesha. 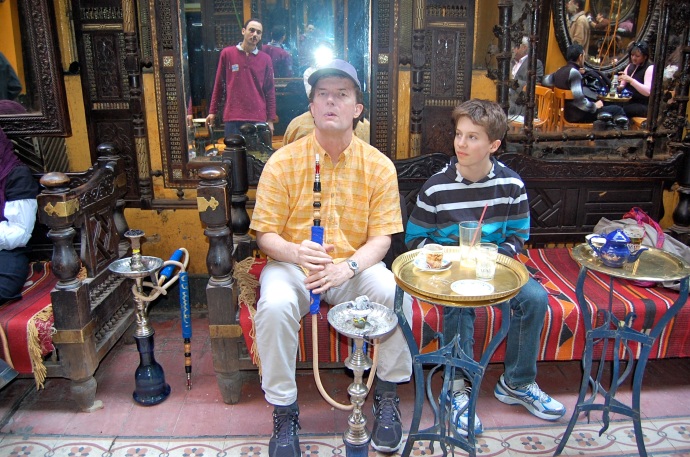 Embarrassing moments traveling with your parents 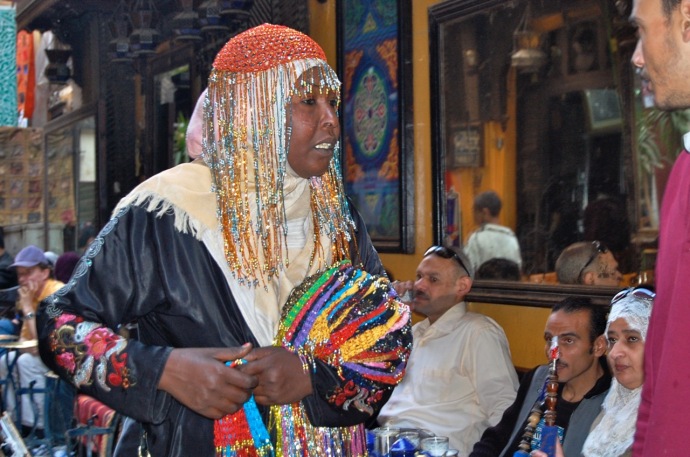 Beware, El Fishawy is not for the faint of heart. This ain’t Starbucks. My teenage son, accustomed to his peaceful, orderly Canadian existence was not impressed. You’d figure he’d think it was cool to be in a sheesha cafe (well, perhaps not with his old parents). I hope, as travel memories mellow over time, he will look back with some fondness, or at least amusement, at the enchanting chaos, noise, and sensory overload. El Fishawy Cafe is a microcosm of Cairo itself—a city whose traffic, pollution, and sea of humanity overwhelms but also seduces the receptive traveler.

How to get to El Fishawy

Include the cafe as part of a guided or independent tour of Islamic Cairo. It’s easy to arrange a tour through most hotels and tourist agencies. If you’re on a private tour, make sure to ask your guide to include a stop at El Fishawy. On your own, get the taxi driver to drop you at Midan el-Hussein, the main square adjoining Khan el-Khalili. From there it’s less than 100 meters. Guidebooks and maps of the area pinpoint the location of the cafe, but you’ll probably have more luck asking the locals to point you in the right direction.