Posted on December 6, 2019 by carolinehelbig 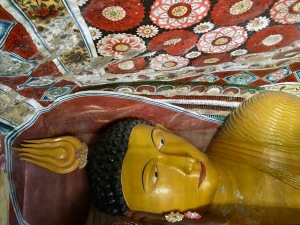 The cavern is enormous. It’s filled with statues of Buddha, kings and deities. The walls and ceilings are covered with murals. Of all the amazing cultural sites in Sri Lanka, my favourites are the cave temples. We visited two: the large, busy Dambulla Cave Temple in the country’s Cultural Triangle and the smaller, lightly-visited Mulkirigala Cave Temple in the south. They’re historically significant for their role as places of Buddhist practice and ritual for over 2000 years, and they remain important holy sites. I’m overwhelmed by the visual feast that’s housed in these natural rock overhangs carved into the cliffs.

We follow a long line of white-dressed pilgrims up the path to the the Dambulla Cave Temple. This Unesco World Heritage Site, only 17km from another outstanding UNESCO site at Sigiriya, is deservedly busy.

The complex consists of five caves that sit under a massive overhang on the side of a sheer rock face. The caves contain 157 exceptionally crafted statues, primarily representation of Buddha with a handful of Sri Lankan kings, gods and goddesses. The cave walls and ceilings are entirely covered with murals—florals, geometrics, and religious scenes. The colours and designs are breathtaking.

Historians believe that Dambulla has been a place of worship since the 1st century BC when King Valagamba was driven out of Anuradhapura and found refuge in the caves among meditating monks. When he regained his throne, he transformed the caves into magnificent rock temples. Over the centuries, subsequent kings added to the collection of statues and wall paintings. The process of restoring the old artwork and adding new continued into the 20th century.

There’s beauty to be found in all five caves, but caves I and II are particularly memorable. Most people find Cave II the most impressive—a huge cavern measuring 52m X 23m. Its size is brought to life for us by a large group of school children who sit on the floor listening to their teacher. They take up only a tiny fraction of the cave, which has an unbelievable number of statues around its perimeter and in pods sprinkled throughout. My favourite though is Cave I. I’m transfixed by the beautiful designs on the feet of the reclining Buddha, the statue of his disciple behind his feet, and the paintings surrounding the scene.

It’s difficult to adequately depict in photos the atmosphere and magnitude of the Dambulla Cave Temple, but here are a few that I like.

Feet of 15m-long recling Buddha in Cave I 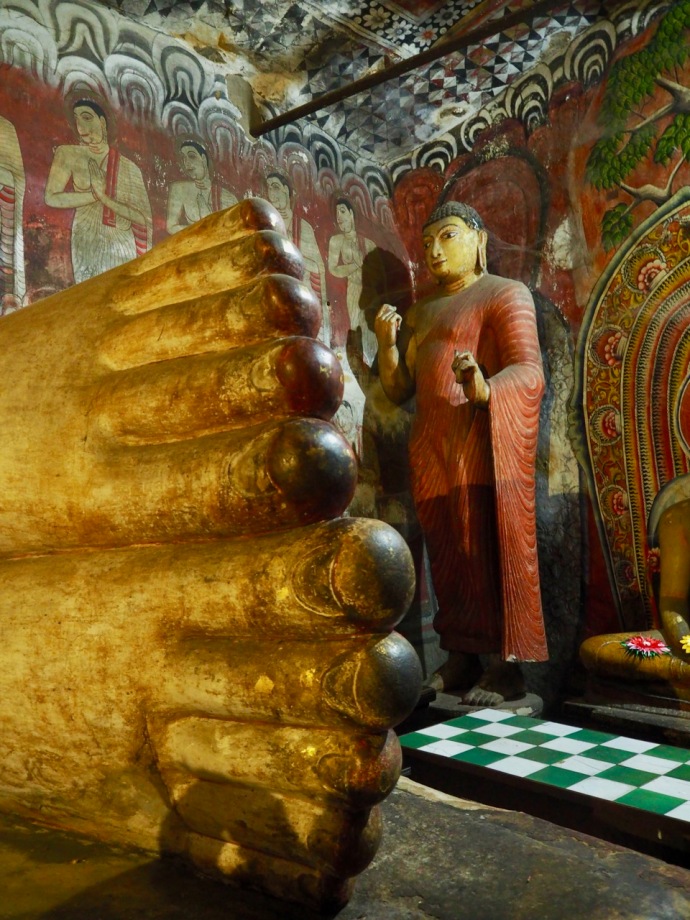 Buddha disciple and incredible wall paintings in Cave I 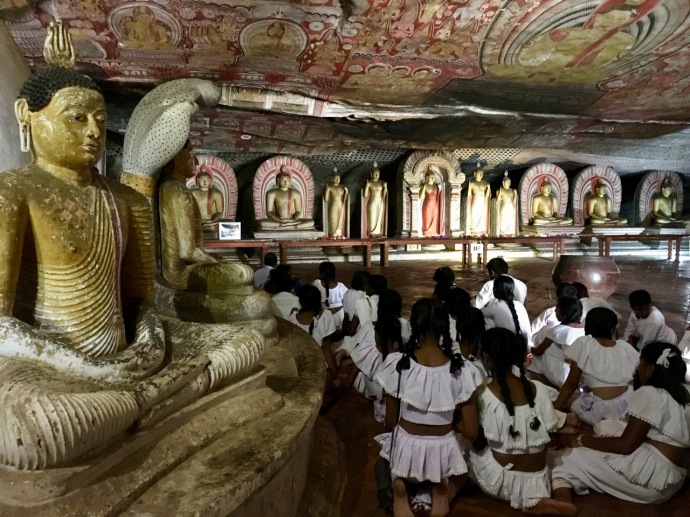 The colour and detail of the Dambulla cave statues are striking 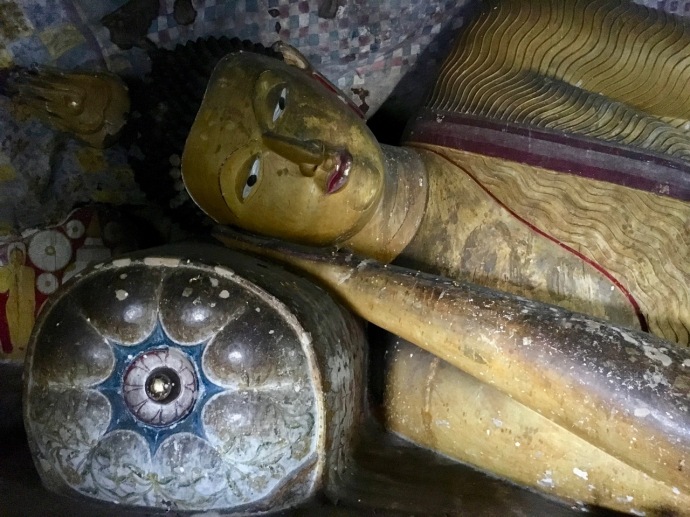 Standing and sitting Buddhas surround the perimeter of the caves

Mulkirigala is not a substitute for Dambulla, but it’s an impressive place and far more peaceful. On our visit, we share the caves with no more than half a dozen people. It makes for an easy cultural side trip from the heavenly beaches at Tangalla, only 16 km away.

The caves at Mulkirigala are believed to have been used as places of prayer and devotion for over 2000 years, but the current temples and cave art date back to the late Kandyan period in the 18th century.

Like at Dambulla, the Mulkirigala caves are hidden in a rocky crag. It’s a sweaty 500 steps to a series of seven cave temples on several terraced levels. The caves house a number of large reclining Buddha statues and smaller seated and standing figures. I’m most drawn to the wall paintings, especially the lovely floral designs.

Unfortunately our visit coincides with one of the frequent scheduled power outages. With only the natural light, many of our photos don’t turn out well. Here are a few I salvaged. 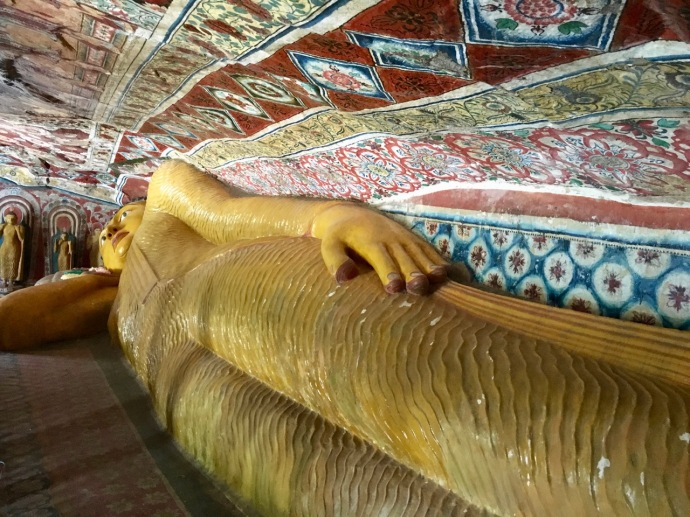 Dragon arch entrance to one of the caves 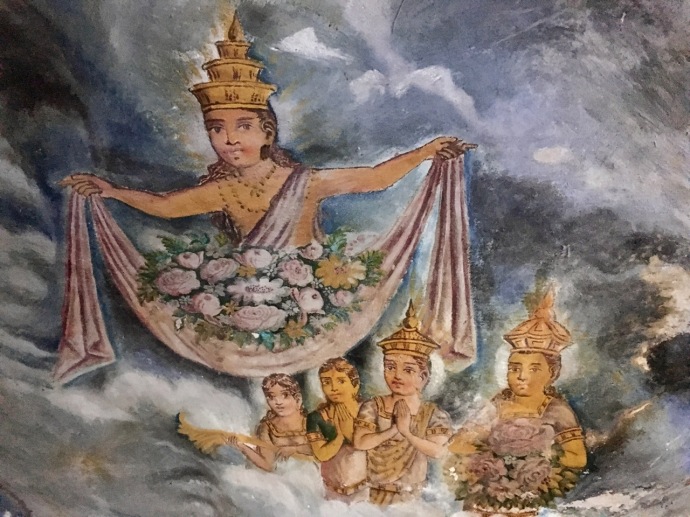 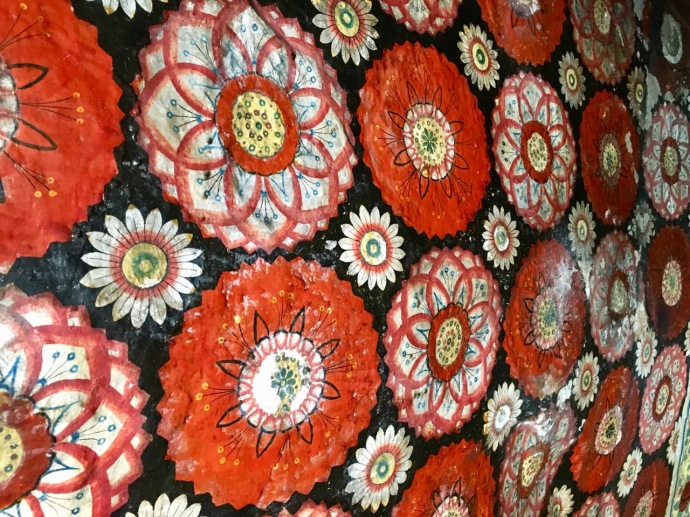 Next posts: Jaffna, and one or two other Sri Lankan highlights. Some of you have been asking about my cycling trip in Brittany and Normandy—posts are coming, hopefully early in the new year!