Best of Hiking, Ambling, and Driving in Southern Utah and Northern Arizona

Posted on November 29, 2016 by carolinehelbig 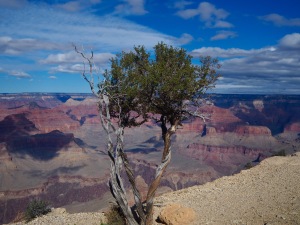 I was thrilled to be back in one of my all time favourite regions for incredible landscapes. Our two week circuit in southern Utah and northern Arizona included a national park trio I will never tire of visiting: Grand Canyon, Bryce Canyon, and Zion. Thanks to fellow blogger Meghan Another Walk in the Park, we also discovered off-the-beaten-path gems in Vermilion Cliffs National Monument, and overlooked beauties in Dixie National Forest. This post highlights the best of our hikes, ambles, and drives through the amazing scenery of the US Southwest. I forced myself to select one photo for each place—an image that reflects its essence (that was tough). In the coming weeks, I’ll be writing more detailed posts, with lots of photos. 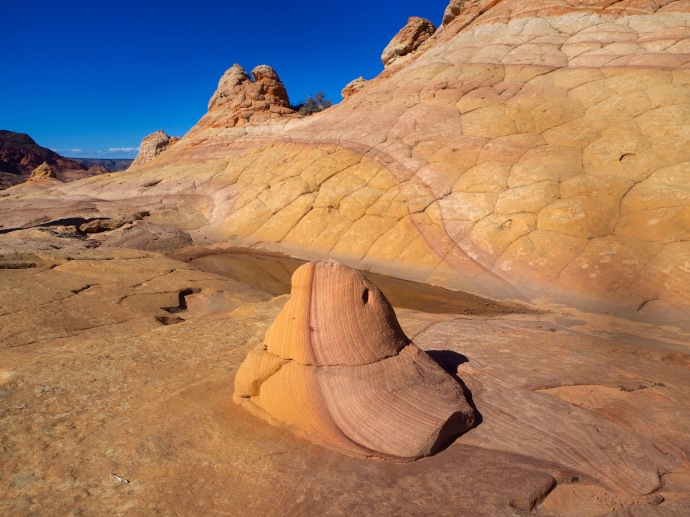 Tucked away in a remote part of northern Arizona, South Coyote Buttes is a bugger to get to and requires a permit, but it’s so worth the effort. There’s no actual hiking trail, just a vast playground of nature’s forces gone wild. The colourful, striated sandstone and outrageous formations are like nothing I’ve seen before. For geological wow factor and lovely solitude, add South Coyote Buttes to your list. I’ll provide details about permits and logistics in an upcoming post. 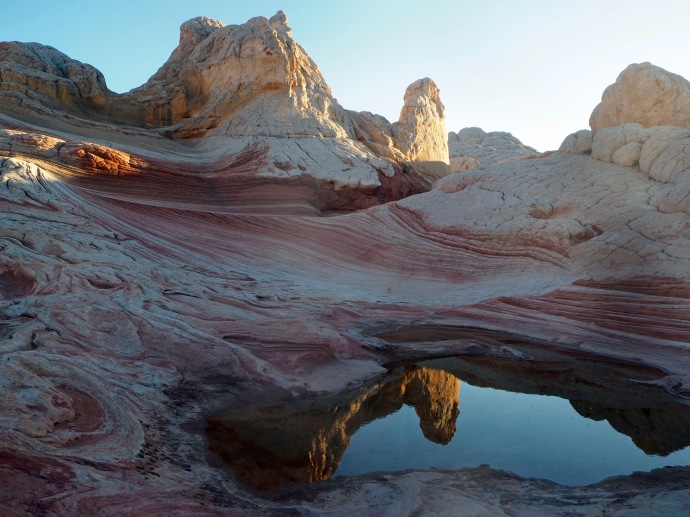 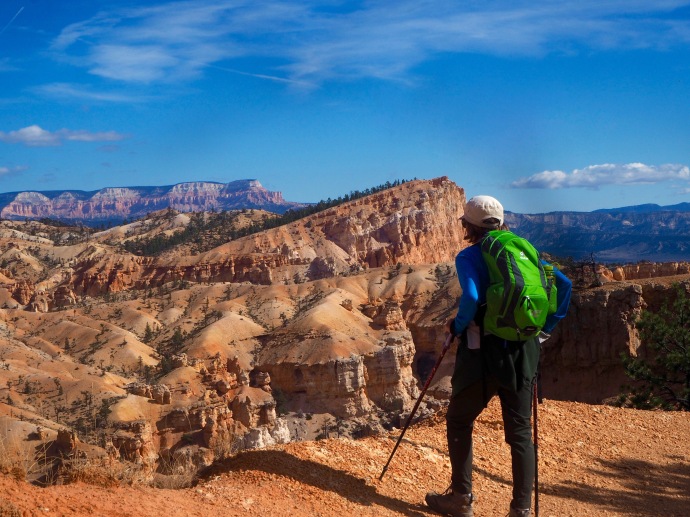 Pondering the “Sinking Ship” on the Fairyland Loop—C.Helbig

If I lived near Bryce Canyon, I’d walk or run the Fairyland Loop every week—it’s that beautiful. It sounds hokey, but walking the 8.3 mile (13.4 km) loop, with its whimsical hoodoos, golden walls, and towering rock castle feels like you’re in a fairy tale world. Lots more to come on this and other great hikes in Bryce Canyon. 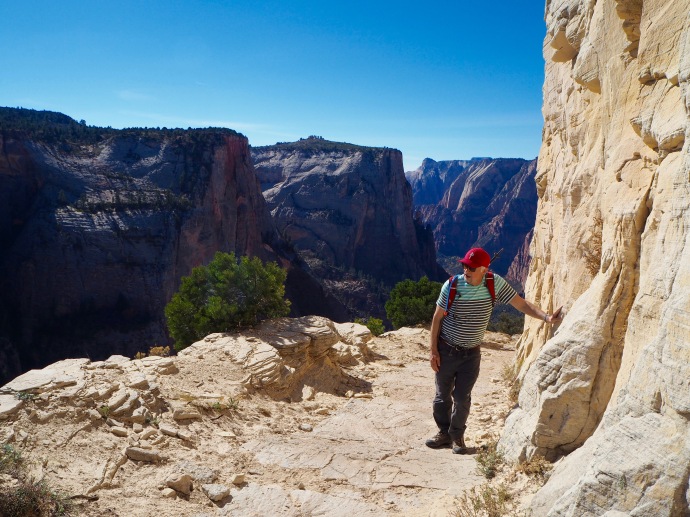 A break on the switchbacks of Observation Point Trail—C.Helbig

Mike’s not keen on this photo. He says he looks exhausted. He probably did need a little break, but I really like the photo because it shows the drama of this 8 mile (12.8 km) roundtrip hike. Observation Point is one of those hikes where the journey up and down is just as good as the stupendous view at the top. It’s a classic Zion hike that gets less traffic than neighbouring Angel’s Landing hike, which scores higher on scary thrills. Observation Point was more than thrilling enough for us. 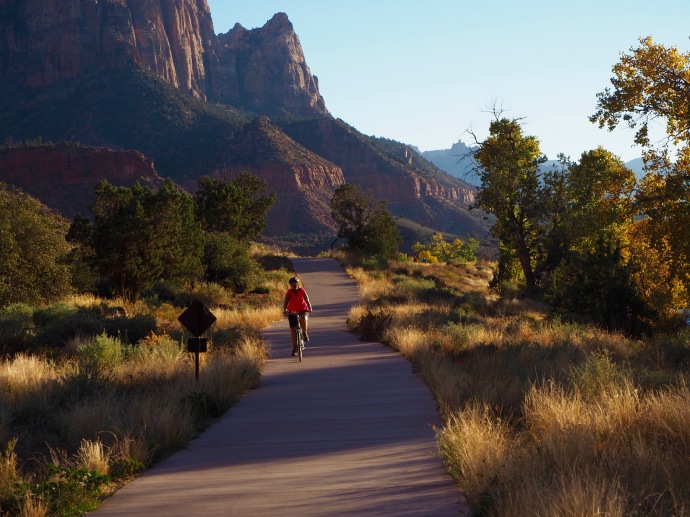 Sometimes I overlook “easy” trails, opting instead for more of a workout. The Pa’rus trail is as easy as they come—wide, flat, and paved for 1.7 miles (2.7 km)—but the scenery is every bit as stunning as what you see on the more difficult trails. We stumbled upon it after our Observation Point hike, preferring a serene walk rather than a crowded shuttle bus drive back to the Zion Visitor Center. It’s a great sunset walk and we were so impressed we walked it again the next morning. 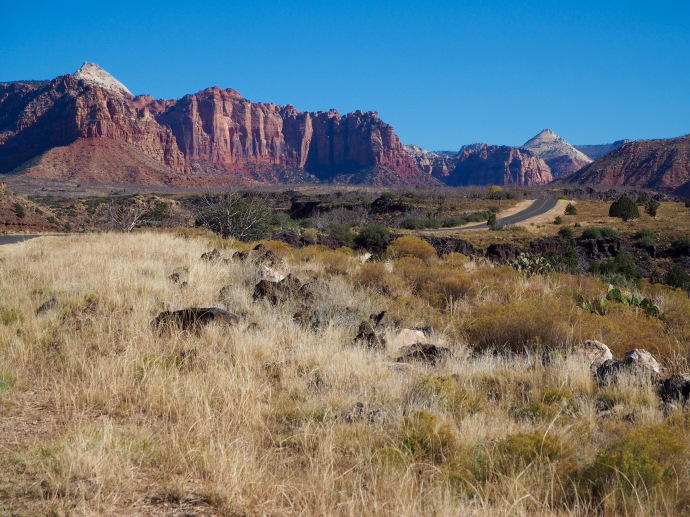 It doesn’t take much to escape the bulk of visitors at Zion National Park. Kolob Terrace Road is just a short drive from the main visitor center but is a much less travelled section of Zion. We were amazed at the roadside scenery. Mike was pulling to the shoulder every couple of minutes so I could take photos. There are some epic hikes that have trailheads along this road, but we only had time to sample a few short ones that I’ll describe in a future post. 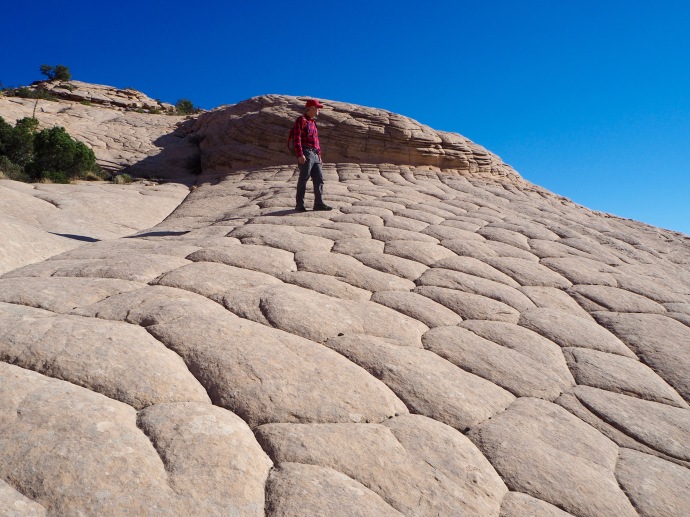 I’m so grateful to Meghan for recommending one of her local favourites. Yant Flat is a gorgeous area of incredible Navajo sandstone formations with endless opportunity for exploration. It shares some similarities with South Coyote Buttes and White Pocket and is definitely easier to get to (though our Dodge Dart rental wasn’t ideal). While I’m organizing my photos, take a look at Meghan’s Yant Flat posts (she has several). 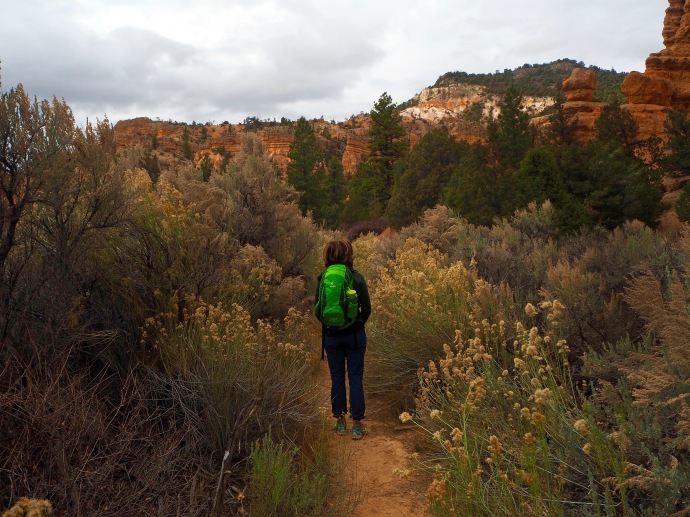 Red Canyon is a place we probably would have driven by had we not taken Meghan’s advice (again). It is on route to Bryce Canyon, only about 14 miles (22.5 km) away, so it’s not surprising that most visitors zip by, anxious to get to the star attraction. But Red Canyon is definitely worth a stop and it doesn’t take much effort (heck, even the road and visitor center parking lot are gorgeous). We did a beautiful short loop that included Pink Ledges, Hoodoo, Birdseye, and Photo trails. 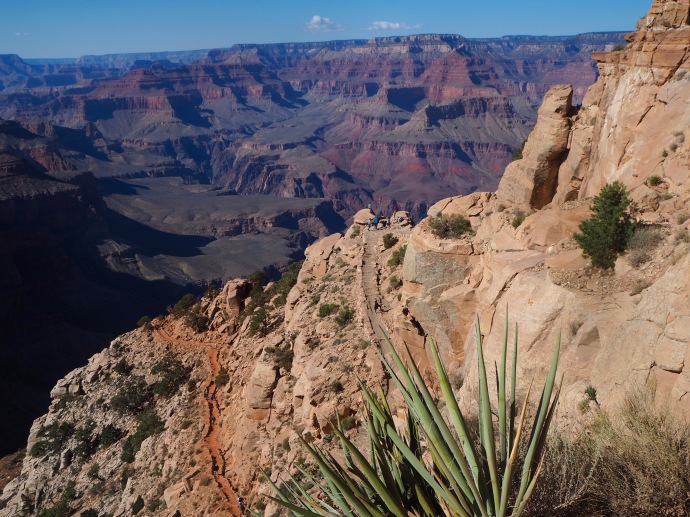 I had a brief moment of feeling sorry for myself when we had to cancel our plans for an overnight hike to the canyon floor. Mike was struggling with a terrible cold and he could barely breath, let alone hike 10 miles (16 km) down and back up again. Plan B was a couple of mellow days exploring the 13 mile (21 km) Rim Trail with generous use of the shuttle bus, and a short jaunt down the South Kaibab Trail (nearly killed him). It’s amazing what you see and learn when you slow things down. We were both very impressed with the extraordinary viewpoints and interpretive displays. And, we have a good excuse to return.

In case your wondering about our route, I’ve plotted it on the map below. Bear with me, I’m still figuring out how to customize google maps. Our trip started and ended in Las Vegas, a relatively inexpensive hub for us Canadians to fly to.

22 thoughts on “Best of Hiking, Ambling, and Driving in Southern Utah and Northern Arizona”