Beyond the Mezquita: Discovering Córdoba, Spain

Posted on November 19, 2016 by carolinehelbig 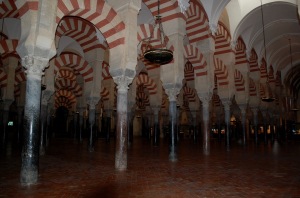 I confess, before visiting southern Spain I would not have been able to place Córdoba on a map. I had no idea about the city’s historical significance and had never heard of the Mezquita—a magnificent mosque with a huge cathedral plonked in the middle of it. Originally, Córdoba had not been on our loosely cobbled-together 4-week itinerary. But that all changed as our trip was nearing its end and my Lonely Planet Spain kept luring me with images of the Mezquita. How could we pass up a side trip to Córdoba when we were so close (only a 45-minute train ride from Sevilla). I’m so glad we heeded the call of the Mezquita and discovered Córdoba.

While the Mezquita is undoubtedly Córdoba’s centrepiece, we enjoyed everything about this picturesque city along the Quadalquivir River. Córdoba’s size (320,000) and compact old-town are perfectly suited for aimless wandering through winding streets and historic monuments. Its selection of restaurants, cafes, and accommodations is excellent, and we found its atmosphere pleasantly relaxing (this was November). For history and lots of photos of the Mezquita, please see my previous post dedicated to this extraordinary monument.

The centrepiece of Córdoba, the Mezquita, from the Roman Bridge—C.Helbig

Córdoba’s easy-going nature belies its powerful historic roots. It was once the capital of Islamic Spain and Europe’s largest, most cultured city. Its zenith was in the 10th century when the city was filled with mosques, libraries, a university and skilled artisans and intellectuals of Muslim, Jewish and Christian faiths. Today, while no longer a political might or large European city, Córdoba is definitely a cultural capital.

The pedestrian-only Roman Bridge is a gorgeous structure that has been renovated many times since its initial construction in the 1st century BC. It affords awesome views to the Mezquita and old town. In the photo above you can see a water wheel that dates back over a thousand years to Islamic rule. Rumour has it that the water wheel was dismantled in the late 15th century when Queen Isabella complained that its noise was disturbing her sleep.

17th century statue of St. Raphael on the Roman Bridge—C.Helbig

Getting back to Queen Isabella, she and her hubby, King Ferdinand, resided in Córdoba during part of their rule. The Alcázar de los Reyes Cristianos  (Castle of the Christian Monarchs) was one of their primary residences. It was there, after many years of negotiation, that they granted Christopher Columbus the funds needed for his famous voyage of 1492.

The Alcázar was built in the 14th century on the remains of Roman and Arab structures. It’s a beautiful place to visit, particularly the gardens with their fountains, orange trees, and immaculate hedging.

Statues of Christopher Columbus, Queen Isabella and King Ferdinand in the Alcázar Garden—C.Helbig

Peaceful garden in the Alcázar—C.Helbig

The Mezquita, Alcázar, and Roman Bridge are all part of a large UNESCO World Heitage Site. Included in the designation are the maze of narrow streets in the old town that house historic neighbourhoods like the medieval juderia (Jewish Quarter). Jews were among the most prominent citizens of Islamic Córdoba. The goofy photo below shows Mike posing with a statue of Maimonides, considered one of the most important intellectual figures of medieval Judaism. He and his family fled Córdoba after a radical Islamic general took power of the city in 1148. 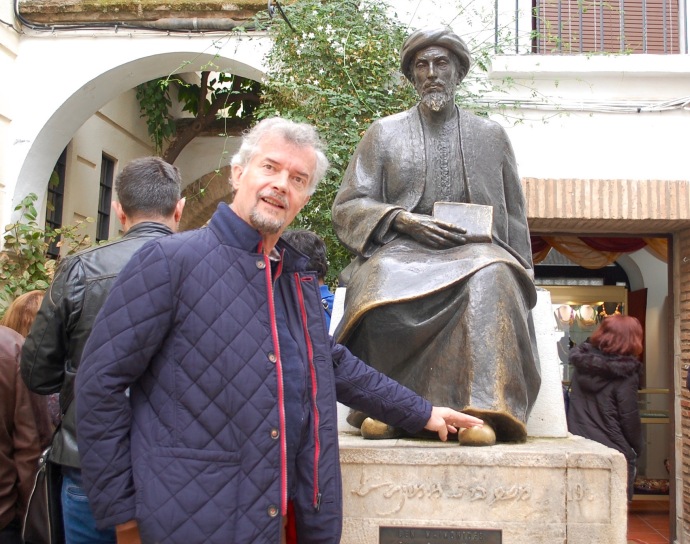 Philosophizing with Mike and Maimonides—C.Helbig

The old streets of Córdoba are filled with treasures. My favourite was the gorgeous little Capilla Mudéjar de San Bartolomé (below). The term mudéjar comes from the Arabic meaning “he who has been allowed to remain.” It refers to the Muslims who stayed after the arrival of Christians and were permitted to retain their religion and customs. Mudéjar art, which I adore,  is a blending of Muslim decorative elements with Spanish styles. 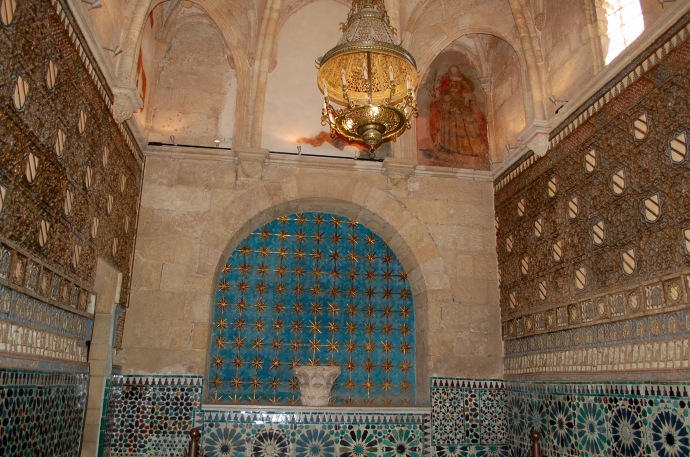 Lest you think Córdoba is only about history (really awesome history), be assured that the present day city is a vibrant place. We were lucky to be there on a weekend when a lively market was in full swing in one of the pretty cobblestone squares.

Enjoying market day in the historic centre of Córdoba—C.Helbig 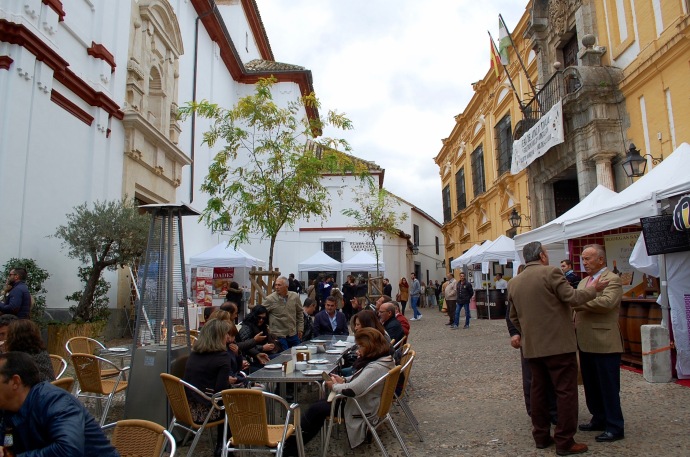 A relaxed Saturday in historic Córdoba—C.Helbig

Córdoba is also famous for its patios with hanging potted plants. There are entire tours devoted to visiting patios. As we were travelling in late November, it wasn’t prime time for blooming flowers, but the photo below shows the distinctive Córdoba patio design. 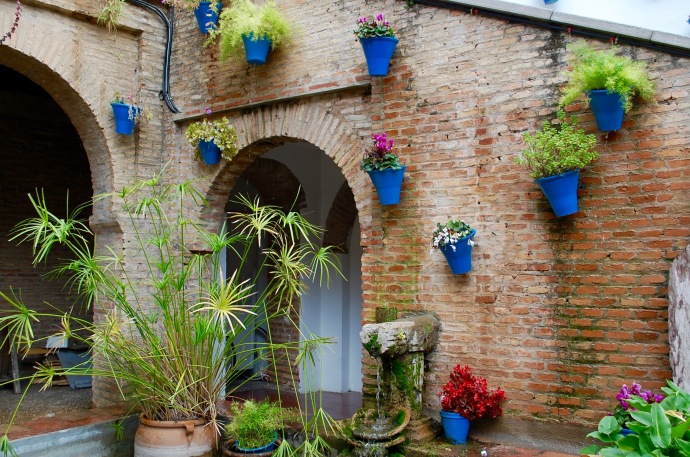 I’ll leave you with a photo of old town Córdoba, as captured from the Mezquita bell tower, and a couple of shots of building facades. Aren’t the design and warm colours magnificent?!

The homes, watchtowers, and churches of historic Córdoba—C.Helbig

Islamic-inspired design adjacent to the Mezquita—C.Helbig

An exterior wall of the Mezquita—C.Helbig

If you’re a bit rushed like we were (and even if not) a great way to get your bearings and learn about Córdoba’s fascinating history is to take a Free Walking Tour. Offered daily, the guides are knowledgable and fun, and you may learn some things not found in academic history books. We also did a tour with this company in Sevilla.

If you’re looking for a cheap and cheerful place to stay, check out Mayflowers Hostel. This immaculately kept place has both private and dorm rooms, and is in a great location.

10 thoughts on “Beyond the Mezquita: Discovering Córdoba, Spain”