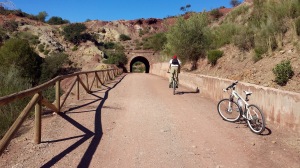 November, 2015. What do you do with 6000 km of unused railway lines? At the beginning of the 20th century, Spain had ambitious plans to connect its rural communities via rail. With the economic crisis brought on by WWI and then the Spanish Civil War, these plans fell apart. Many of the railway lines, in various states of completion, were never used. They lay neglected until the early ’90s when Spain introduced the Via Verde Program—transforming unused railway lines into biking/walking greenways. There are now over 2000 km of Via Verdes across rural Spain, with over 100 different routes. We had the pleasure of cycling the 36.5 km Via Verde de la Sierra, which links the villages of Olvera and Puerto Serrano in southern Spain’s Andalucia region. It is the crowning jewel of the Via Verdes and has won numerous awards for best greenway in Europe. 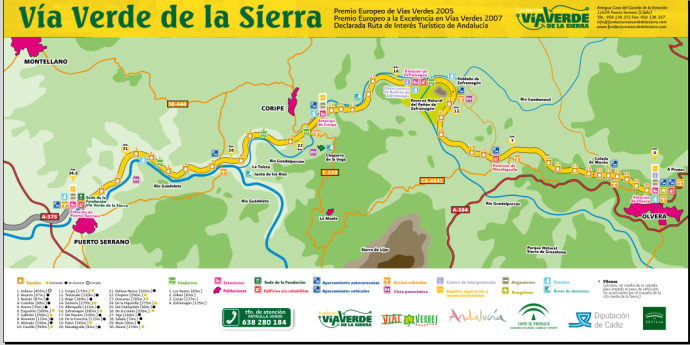 We set out from our base in neighbouring  Zahara de la Sierra on a beautiful Sunday in early November for the short drive to Olvera. We hadn’t done much research on logistics but our guesthouse hosts assured us we could rent bikes at the official start of the route, tucked just behind the village. Sure enough, we had no trouble finding the old Olvera railway station (never used for its original purpose) that now houses a restaurant, hostel and bike rental facilities.

The Via Verde starts out paved but then changes to hard-packed gravel after the first few kilometres. There’s a 1-2% grade (downhill to Puerto Serrano), so the pedalling is easy. The route travels through pretty countryside, farmland, and protected wilderness. It has wide appeal, attracting families toting young kids in bike trailers, weekend warriors, walkers, and even horseback riders (tourists were noticeably absent). Motorized vehicles are not allowed, there are no roads in sight, and the only signs of “civilization” are a few farmhouses—a wonderfully peaceful experience. 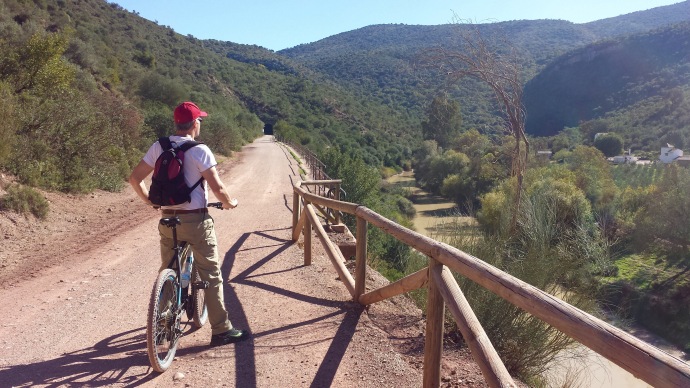 Peaceful, rolling countryside along the Via Verde de la Sierra—C.Helbig 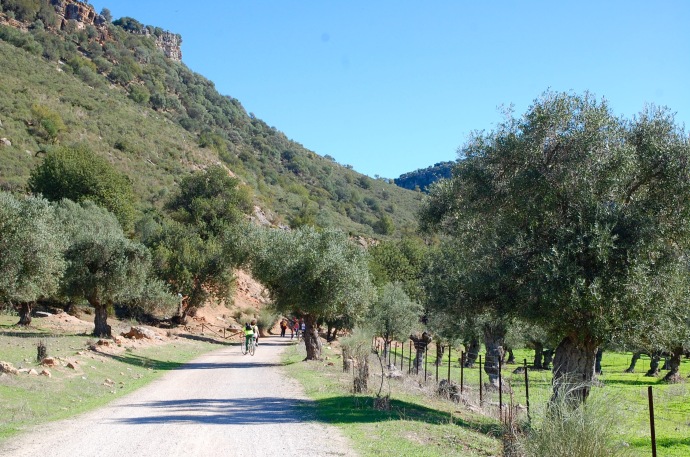 The scenery is lovely, but my favourite thing about the route is the man-made structures. There are 30 tunnels and 4 viaducts spread over the 36.5 km. One of the tunnels, near the 22 km mark is a whopping 990 m long. It’s quite a thrill biking through the tunnels, which are dimly illuminated with sensor-activated lighting. For some reason, I felt like I was traveling much faster than out in the daylight. Even in November, the cool tunnels were a welcomed break from the sun. Pack plenty of water no matter when you go. 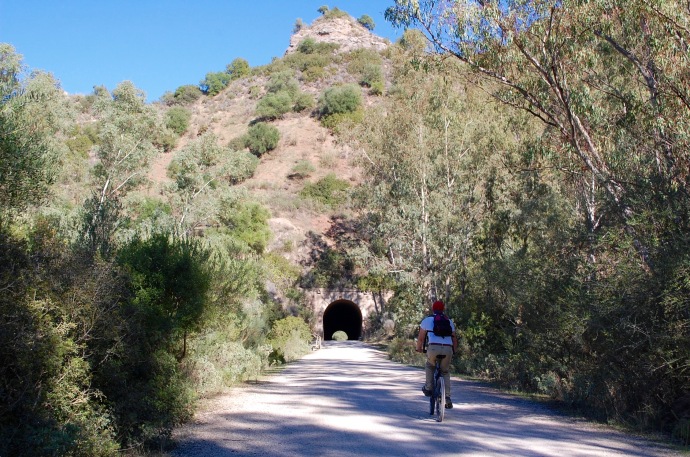 There are 30 tunnels along the Via Verde de la Sierra—C.Helbig 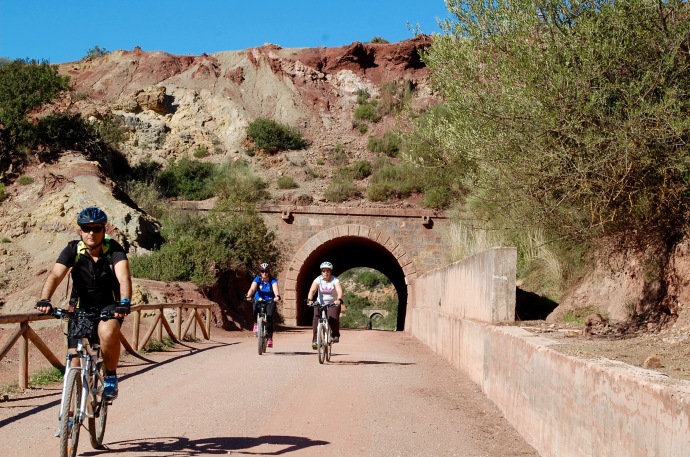 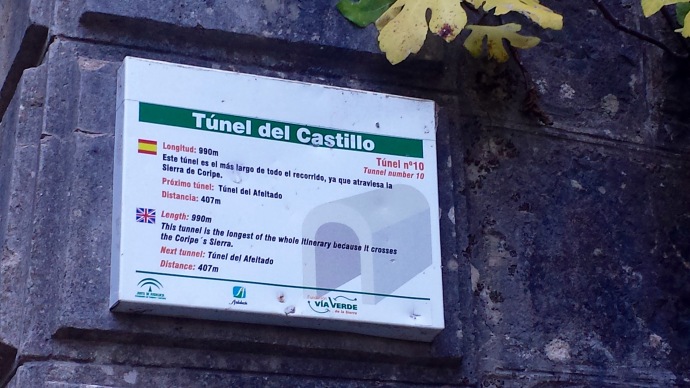 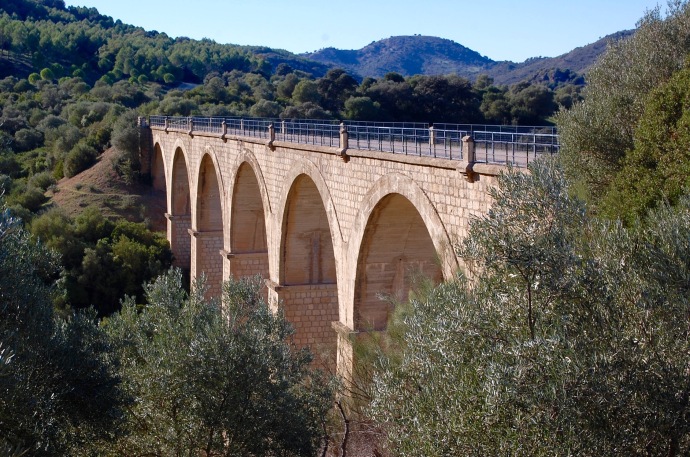 One of four viaducts along the Via Verde de la Sierra—C.Helbig

The most beautiful natural scenery along the route is about 16 km from Olvera, at Reserva Natural del Peñón de Zaframagón, a craggy limestone outcropping that is home to Europe’s largest concentration of griffon vultures. There’s a visitor centre at the Zaframagón train station that apparently has high-powered cameras that allow visitors to watch the nesting vultures, but sadly it was not open when we were there. 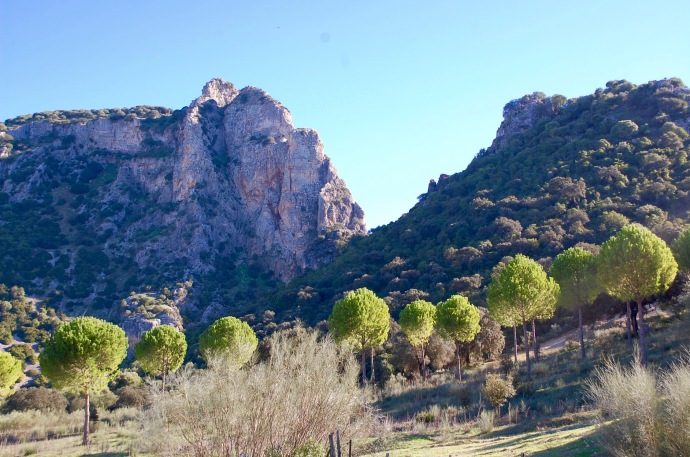 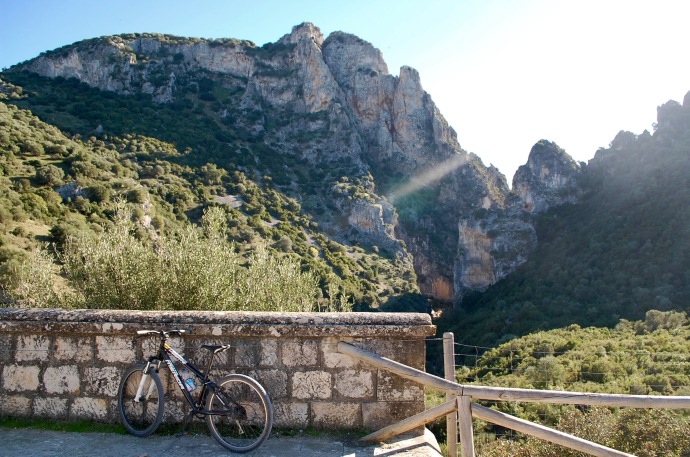 There’s a perfect refuelling stop at Coripe train station, a bit past the halfway mark. The snack bar, outdoor patio, and full-service restaurant were buzzing with folks enjoying cold beers and tapas. Coripe is one of the few places with vehicular access to the Via Verde (other than Olvera and Puerto Serrano) and is a good alternative if you have less time and only want to ride a short distance. It’s only a few kilometres to Túnel del Castillo (the longest tunnel) in one direction, and about 5 km to Zaframagón in the other direction. There’s also bike rental at Coripe, but based on how busy this mid-station was, I’d suggest getting there early or inquire about reserving at sesca.es.

We made it to about km 32 and realized that we needed to turn around to get our rental bikes back by closing. The very slight uphill back to Olvera is not a big deal but definitely noticeable after doing 60+km on clunky mountain bikes (and aging bodies). In retrospect, we could have started in Puerto Serrano and done the uphill first, but we weren’t sure whether we could get rentals there (you can). Another option is doing a one-way ride to Puerto Serrano and then catching a special taxi with bike hitch from there back to Olvera. We’re too cheap to do this, but it can also be arranged through sesca. 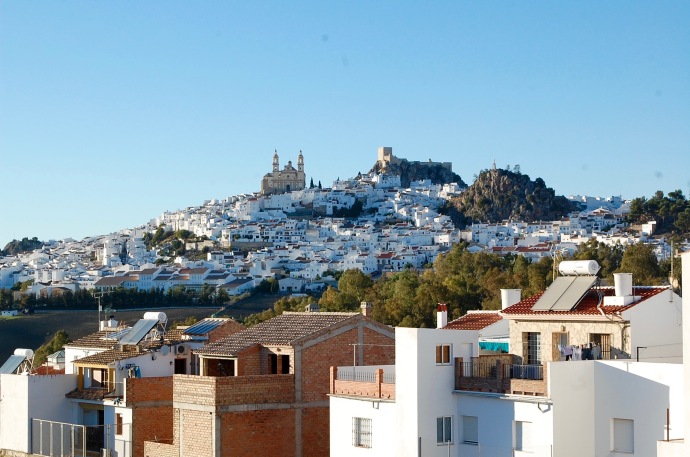 The town of Olvera, where the Via Verde de la Sierra starts (on the other side of the hill)—C.Helbig

Before heading back to our guesthouse, we rewarded ourselves with a couple of decadent pastries at a wonderful bakery in Olvera. It’s a magnificent looking town that I wish we could have explored in more detail.

If you missed my posts about other outdoor activities and beautiful towns in this area, please check out My favourite Pueblo Blanco. I’ll be doing one more post about a great hike between Grazalema and Zahara de la Sierra and then I’m moving on to fabulous Sevilla.