Posted on February 17, 2016 by carolinehelbig

One of many beauty spots in Spain’s Pueblos Blancos (Grazelema)—C.Helbig

November, 2015. The pueblos blancos (white towns) that dot southern Spain’s Andalucia region are consistently postcard perfect. Many are sprawled on the side of a hill, or perched on top of a steep-sided cliff. They are usually dominated by a giant church or fortress or both. Their whitewashed buildings are brilliant against the deep blue Spanish sky and vivid pinks of flowering bougainvilleas. Their Moorish past lends an exotic charm.

We stayed in four white towns as we slowly made our way from Granada to Cadiz. They are all magnificent and share many similarities, but we discovered that each has its own vibe and special features.

Zahara is a small town (pop.1500), but its location around a rugged crag topped with a 12th century castle gives it a huge presence. If you think the view up to the town and castle is great, well…the view down to the shimmering turquoise lake is equally spectacular. It’s this stunning setting that is Zahara’s best feature and makes it particularly memorable.

If you’re seeking peace and quiet, and dramatic scenery, this may be the pueblo blanco for you. The pretty Plaza Mayor has a few restaurants and bars that are busy during the main mid-afternoon meal, but generally, it’s a delightfully sleepy place. Beyond exploring the charming streets and climbing up to the castle for the rocking views, Zahara is a good base for hiking in Parque Natural Sierra de Grazalema, and biking on the Via Verde de la Sierra, one of Spain’s finest biking greenways. 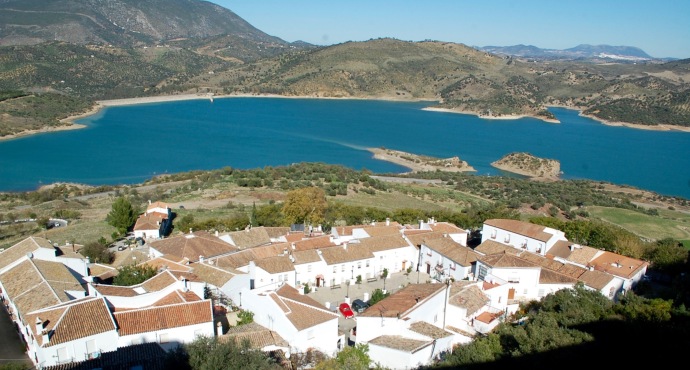 Another view down from the castle atop the village—C.Helbig 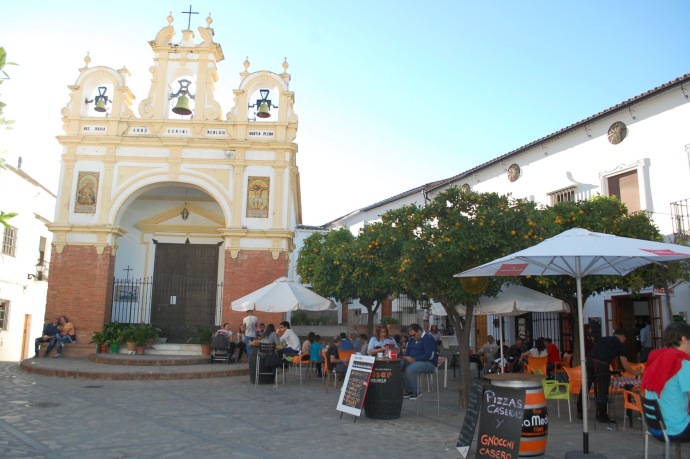 For a very comfortable, affordable place to stay (about 60 Euros), check out Hostal los Tadeos. Don’t let the word “hostal” fool you. This place even has an infinity pool overlooking the valley. The owners are lovely but speak very little English and their website is poor (but don’t be put off).

It’s an awesome, curvy, 16 km hair-pin drive from Zahara de la Sierra to Grazalema.  The town is located in the heart of the Sierra de Grazalema, a rugged limestone mountain range. In Zahara, you feel like you’re on top of the world whereas in Grazalema (pop.2200) you feel protectively enveloped by the peaks surrounding it.

This is a place where you can enjoy a leisurely tapas meal in the sun-drenched main square, Plaza de España, and then walk to trailheads leading to wonderful hikes. You may want to do this the other way around. We were regretting eating that second plate of meatballs as we trudged up the trail adjacent to the Peñon Grande, the monolith that towers over Grazalema.

It’s the easy access to hiking (no car needed) that makes Grazalema especially appealing for active, nature-lovers like me (check out my hiking post). Like Zahara, it’s a small place with a relaxed vibe and pretty streets lined with immaculate whitewashed houses and flowering trees.

Grazalema is surrounded by mountains with great hiking—C.Helbig 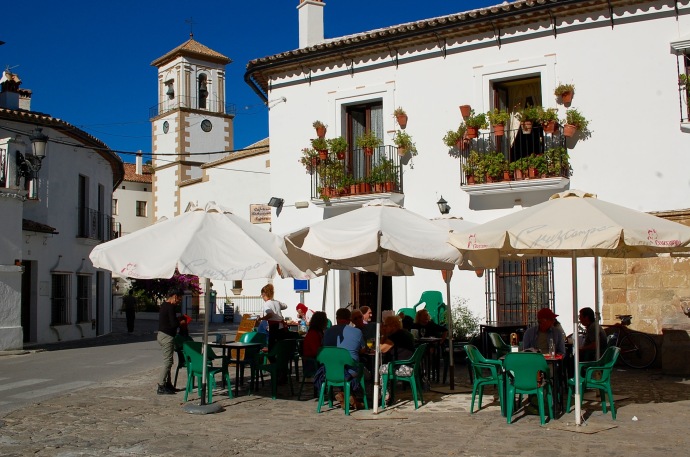 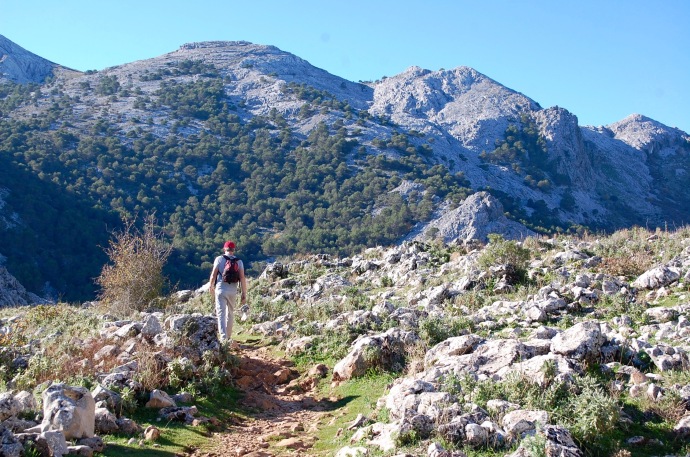 Hiking just above the village of Grazalema—C.Helbig

Room with a view at La Majorana, Grazalema—C.Helbig

Great base for hiking from doorstep, very pretty village.

For an amazing place to stay with owners who are super helpful and can tell you everything about local hiking, try La Mejorana. Great value at 58 Euros with breakfast. This was my favourite lodging during our four weeks in Spain. 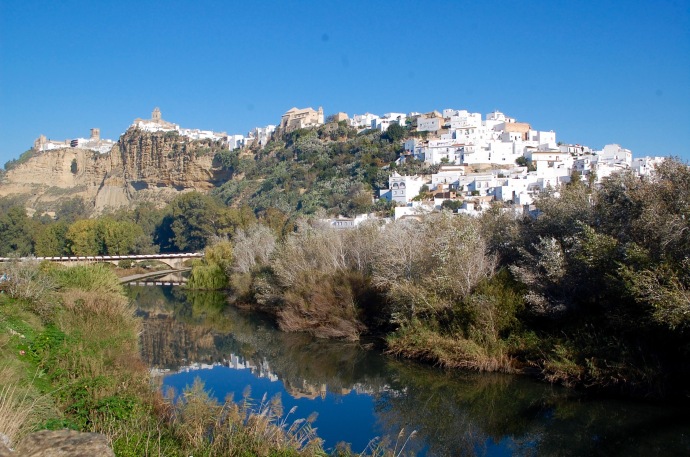 You “wanna” be  King of the Castle? Head to Arcos de la Frontera where you can be perched on top of a sheer precipice gazing out at your empire. Or, if you’re like me, you’ll be content sipping a glass of wine well back from the edge.

With a population of 31,500, Arcos is a much larger pueblo blanco than Zahara and Grazalema, but the main tourist area—in the old town at the very top of the hill—only covers a small area. Its larger size means more restaurants, souvenir shops, and tourist amenities. Apparently it can get quite crowded in peak season, but that wasn’t a problem in November.

Once you’ve stopped gaping at the view, there are several impressive churches to visit and plenty of picturesque cobblestone streets to explore.

A sheer drop from the old town of Arcos de la Frontera—C.Helbig

That’s more like it…slightly away from the edge in Arcos de la Frontera—C.Helbig 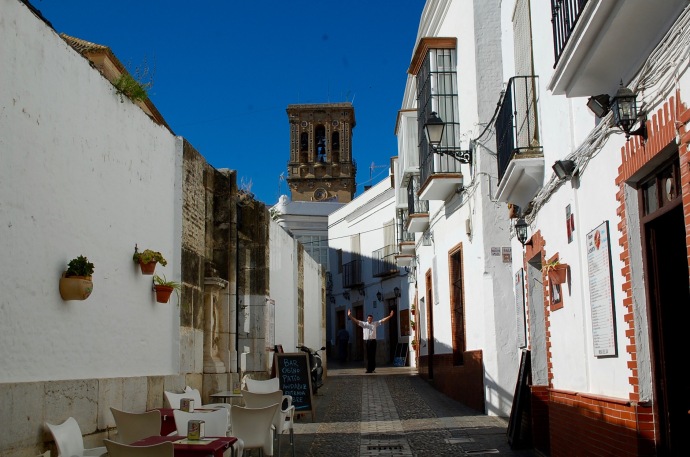 Yes, we drove through that narrow passage in Arcos—C.Helbig

Dramatic setting, lots of choice for eating and sleeping.

We stayed at La Casa Grande—a quirky, older place with a killer rooftop patio (photo two up). Another awesome value spot (about 60 Euros). 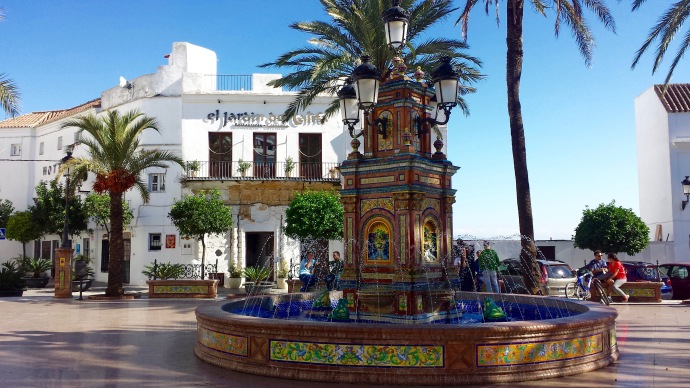 Vejer de la Frontera sits dramatically atop a rocky hill (sadly I don’t have a photo). Perhaps I was too mesmerized by the most exquisite town square with its polished stone surface and tile fountain. It is a beautiful gathering spot surrounded by great eateries, a fun wine and sherry tasting bodega, and a lovely hotel.

Just above the plaza is the arched entrance to the old, walled town. It’s an enchanting place of quiet, twisting streets and stunning views. In case you’re wondering, the “de la Frontera” part in both Arcos and Vejer is a reference to the frontier towns that formed a boundary between Christian-held territories and Muslim towns during the Middle Ages.

The town of approximately 12,800 inhabitants is special in its own right, but its bonus appeal comes from being only 10 km from the long sandy beaches of the southern Costa de la Luz.  We used it as a base to explore the coast down to Tarifa at Spain’s southern tip (check out my post on the Costa de la Luz).

Incredible views from the tiny streets of old Vejer—C.Helbig

The Costa de la Luz is only 10 km from Vejer de la Frontera—C.Helbig

Entrance to our room in the Hotel La Casa del Califa—C.Helbig

We did a mini-splurge at the gorgeous Hotel La Casa del Califa. The 90 Euro price (one of the lower priced rooms) was still extremely reasonable for this characterful hotel with exotic Islamic decor. The restaurant downstairs has amazing ambiance and great Middle Eastern food.

Tips, Other Stuff, and a Verdict on Favourite Pueblo Blanco…

I’m just learning how to customize and embed google maps, so bear with me. You’ll have to zoom in a bit to see the detail of our route.