Posted on January 12, 2016 by carolinehelbig

Granada’s Albayzin District with view to the Alhambra—C.Helbig

November 3-5, 2015. If you’ve read my post on the Alhambra, you’ll know how much I love this spectacular monument. I also love the area we stayed in. Granada’s Albayzin district is a UNESCO World Heritage Site steeped in its medieval Moorish past. It’s a magical place, sprawled on the side of a hill with narrow cobblestone streets, traditional tea rooms, and the best views of the Alhambra. You’re guaranteed to get lost in its tangled labyrinth, but it’s a joy when every turn brings another wow scene.

The “getting here” instructions (below) from our guest house website, gave us a sense of the Albayzin’s delightfully confusing, pedestrian-only layout. I had a good feeling about the place.

“No matter how you arrive to Granada you need to get to the pick up point.  Which is Aljibe de las Tomasas (known as the stop to get to Restaurante El Agua).  The Restaurante is not exactly there, so don’t go looking for it, but it is how the Taxi drivers know where to drop you off.  Please wait for us where you are dropped off to avoid getting lost.”

Surprisingly, the instructions worked (thank God for cell phones) and we were met at the top of a long, cobblestone staircase by Rafa, our genial host at El Numero 8. The website also cautioned about bringing only what you can carry. By the way, wheelie luggage doesn’t work too well (thank God it was downhill).

Many guest houses just hand out a map and send you on your way, but the Albayzin is so tricky that Rafa actually gave us a little walking tour. The photos below were all taken on our daily walks from El Numero 8 down to restaurants, shops, and the main square (and up again!). 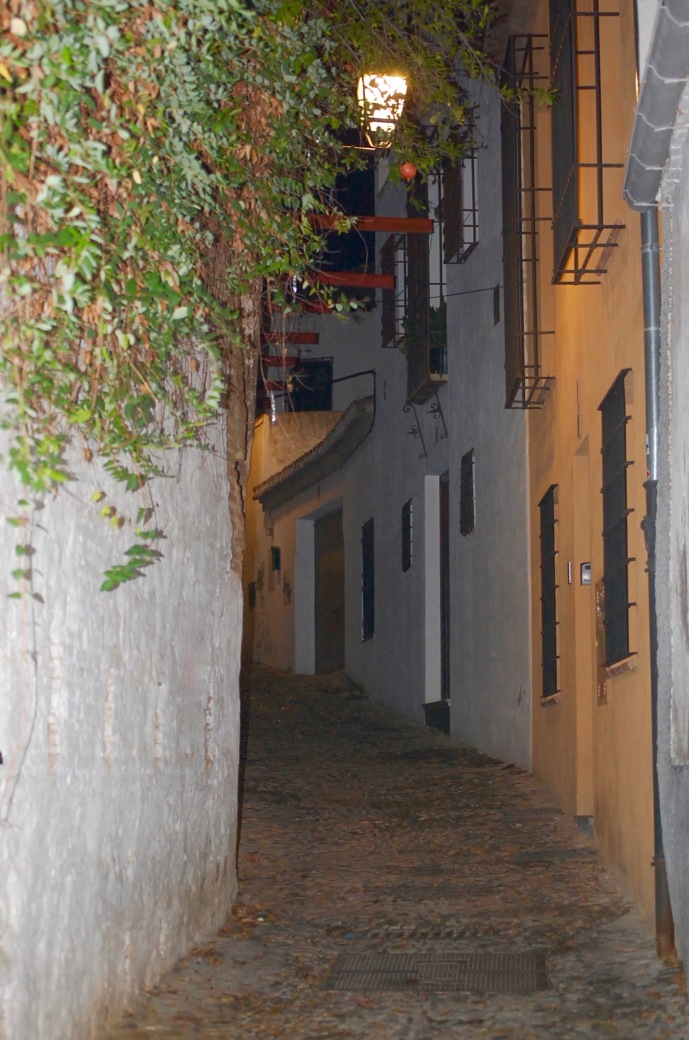 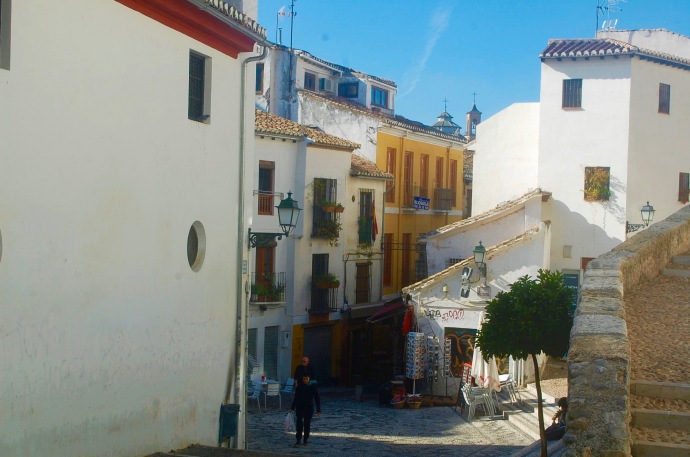 The Albayzin district has without a doubt the best views of the Alhambra, the Islamic fortress and palace complex that presides over the city. The most popular viewpoint is the Mirador San Nicolas. The small plaza is particularly busy around sunset when the rich hues of the illuminated Alhambra walls and the pink glow of the sky give the scene a mystical look and feel. 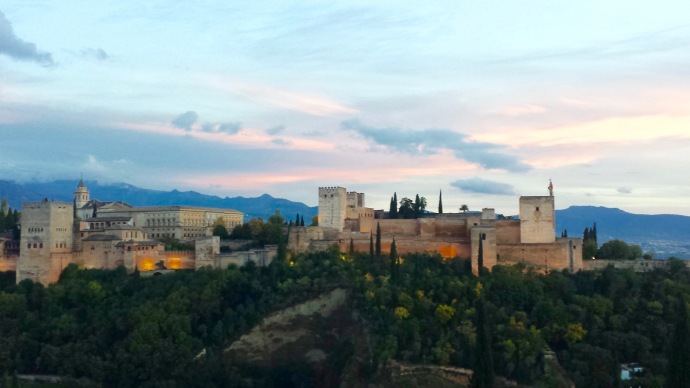 View of the Alhambra from the Mirador San Nicolas—C.Helbig

Another view from the Mirador San Nicolas—C.Helbig

Walking down after the sunset. I love those street lamps!—C.Helbig

For people like me, who can never get enough Alhambra views, the Albayzin neighbourhood is the perfect place. The popular miradors are great, but I loved even more the peek-a-boo views between the tightly packed old houses and walls. I got hopelessly and happily lost one late afternoon, stumbling upon dozens of gorgeously framed views.

Granada served as the capital of Islamic Spain and was the last city  to fall to the Catholic monarchs in 1492. The Albayzin district is one of the oldest neighbourhoods in Europe and retains a Moorish vibe. Walking along the Calle Caldereria Nueva, with its tea and hookah rooms, and the tiny shops selling ornate slippers, jewelry, and lanterns feels a little like you’ve landed in Morocco.

After long days of exploring the Alhambra and the streets of Granada, there are no shortage of drinking and dining options in and around the Albayzin. We ate plenty of tapas and we also enjoyed a change of pace with delicious North African cuisine, found in abundance along Calle Elvira and Calle Caldereria Nueva.

My son Alex would be upset if I didn’t mention his favourite thing about Granada: the cheap beer and free tapas. He spent a long weekend in Granada with his study abroad pals and never ordered an actual meal. Granada is known for its many tapas places that offer a small, free tapa when you order a beer or glass of wine. No wonder he doesn’t remember too much about his Alhambra visit! 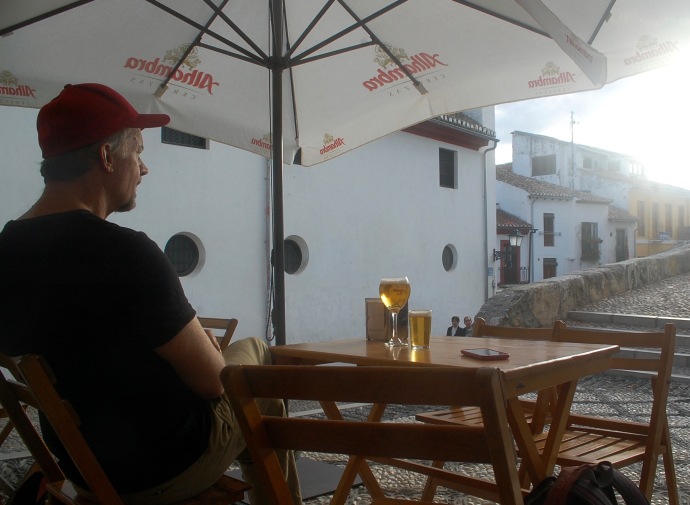 Our favourite late afternoon drink spot in the Albayzin…yup, free tapa even with that tiny beer—C.Helbig

An example of the reason why my son was so fond of Granada—C.Helbig

I’d go back and stay in the Albayzin district in a heartbeat. Its exotic flare, history, architecture, and views make it a very special place. Beyond its boundaries, there’s more to explore and it’s a beautiful walk to the Alhambra and other parts of Granada.  Beware though that it may not be the best choice if you’re mobility impaired or don’t relish walking up and down hilly terrain.

El Numero 8, in the heart of the Albayzin, was a great find with very reasonable rates. It has four small apartments with self-catering facilities. It’s simple, authentic, and comfortable with a relaxed atmosphere and friendly, helpful on-site innkeepers. Don’t stay there if you’re looking for luxury and lots of amenities. Did I mention that the rooftop patio has a view of the Alhambra!

View of the Alhambra from El Numero 8 rooftop patio—C.Helbig

Stay tuned for a post about a great hike near Granada (no car needed). I’ll also be moving on to the spectacular Pueblos Blancos (White Towns) of Andalucia.