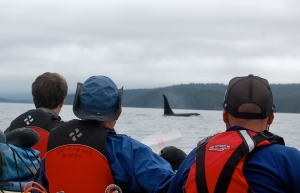 A captivating moment with the orcas in Blackfish Sound—C.Helbig

I’ve had a lot of amazing experiences in some really beautiful places. Kayaking with the whales in the Broughton Archipelago ranks right up there with the best of them. The spectacular scenery in BC’s largest marine park, off Vancouver Island’s northeast coast, is alone worth the visit. But paddling through waters with orcas (killer whales), and waking up to the sound of spouting humpback whales puts it over the top.

I’m not a seasoned kayaker, nor do I own the necessary equipment. So, I decided to sign up for a 6-day kayaking expedition with Spirit of the West. Great decision! Sadly, Mike couldn’t join me; his back was out. Too bad, I’ll have to go again!

My paddling companions were eight folks from Canada, the US, and Holland, plus our two awesome guides, Tessa and Pat. Our trip started with a 2-hour water taxi ride from Telegraph Cove into the heart of the Broughton Islands. En route, our group bonded over the shared excitement of seeing enormous humpbacks in the Johnstone Strait. We were off to a good start.

Our first night’s accommodation was at the Paddler’s Inn near Echo Bay. This small float house oozes rustic charm. It’s a great spot to stage kayaking trips, and a lovely place to hang out and explore the surrounding forest trails. 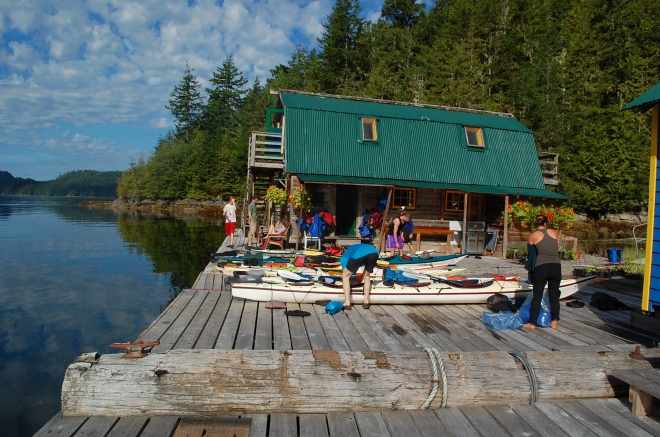 Getting ready to depart from Paddler’s Inn, Broughton Archipelago—C.Helbig 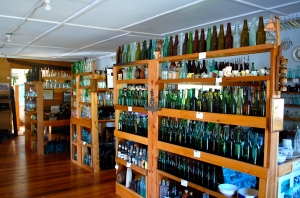 We got accustomed to our crafts with an easy paddle to Billy Procter’s Museum. Billy is a life-long resident of tiny Echo Bay. He has been a fisherman, logger, salvager, and activist, and is the co-author of Heart of the Raincoast: A Life Story. He’s a fascinating character and his one room museum is a treasure trove of bottles, arrowheads, fishing lures and other items he has collected during his life in the Broughton Archipelago. 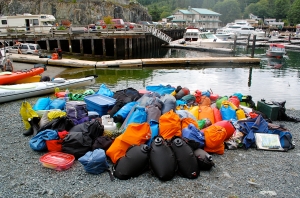 Hard to believe all this fit into our kayaks—C.Helbig

Our paddling started in earnest the next morning, but first we had to learn how to pack our kayaks. We had a huge pile of stuff and I was astonished by how much our kayaks could hold: food, water, camping/cooking gear, and personal items for 11 people. Oh ya, almost forgot about the boom box—a portable toilet with lid.

Our next four days fell into a comfortable routine of paddling in the morning, stopping for a snack— a feeding frenzy really, as our group included three guys ages 15-20— and another short paddle before reaching our wilderness camps in the early afternoon. We’d set up camp, feast on a tasty lunch, and choose between an afternoon paddle and pleasantly lazy activities around camp. 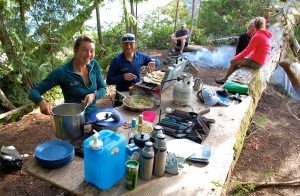 Another gourmet dinner in the wild—C.Helbig

By 6:00 pm it was appy time—smoked salmon, goat cheese with pears, stuffed grape leaves just to name a few. Dinners were divine. My personal favourite: Thai curry followed by chocolate fondue. Not long after, I’d stumble into my tent. At 7:00 am, Pat played a tune on his harmonica, signaling that coffee was served.

The weather too, followed a predictable pattern. Mornings were dead calm and foggy. I didn’t mind the gloominess. It added to the mystique of the rugged West Coast setting. By midday the sun would break through and by late afternoon we’d be warming ourselves like seals on the heated beach rocks. 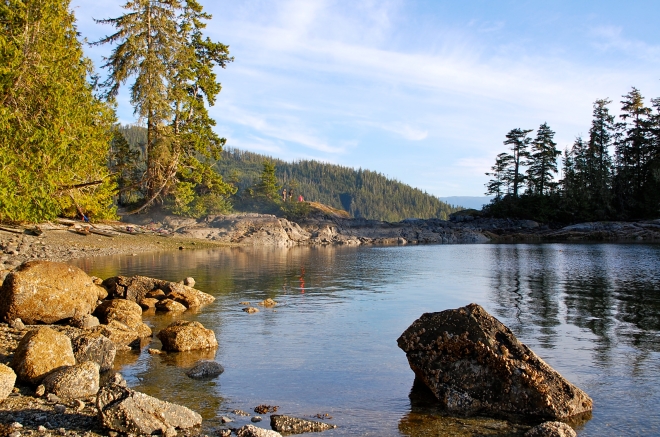 Soothing late day sun at our camp on Island 66 in the Fox Group—C.Helbig

The archipelago is a mass of rugged, undeveloped islands and tiny islets. The craggy, contoured shorelines and narrow passages are a kayaker’s paradise. Except for some sparsely populated First Nations settlements, and fish farms there are few human inhabitants. The waters however support a sizable population of resident and transient orcas, humpback whales, porpoises, seals, and sea lions. The tree tops and skies are filled with eagles, and while more elusive, the islands are home to bears and cougars. 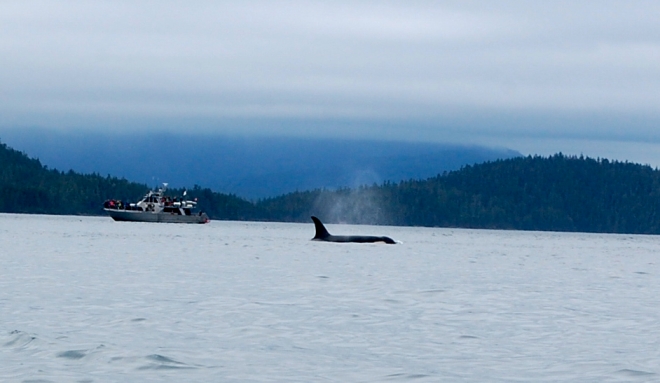 Seeing an orca in relation to a boat makes you realize the enormous size of these creatures—C.Helbig

I enjoyed every day, but for marine life, our paddle from Owl Island around the northern tip of Swanson Island into Blackfish Sound was the pinnacle. We rafted up near the tip of Swanson and let the current take us almost the entire length of the island, all the while watching the mesmerizing whale activity. One humpback surfaced so closely, it took us completely by surprise. 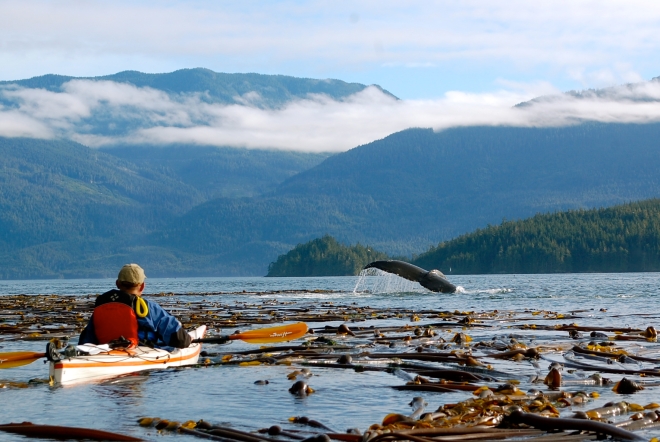 Another magic moment in Blackfish Sound—C.Helbig 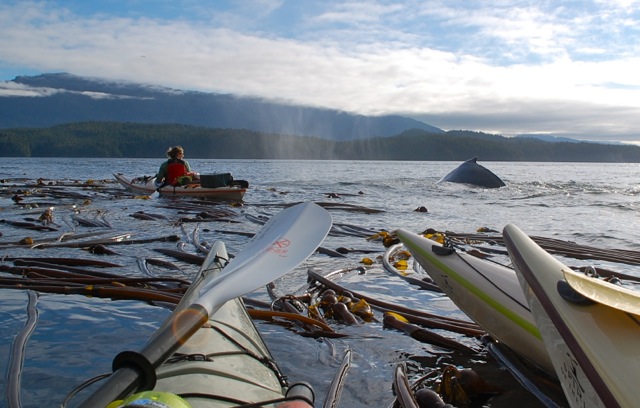 An unexpected close encounter with a humpback—C.Helbig

At our camp on Compton Island the whale show in Blackfish Sound continued. We watched the whales spouting as the sun went down and we were greeted with the distinctive sound when we woke in the morning. Totally awe-inspiring!

For pure beauty and serenity, my vote goes to the Plumper Islands off the northeast end of Hanson Island. I loved paddling through the small passages, watching juvenile bald eagles take their first flights. 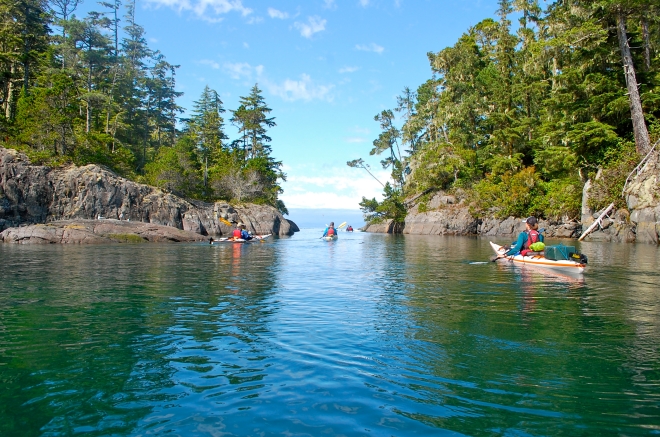 Paddling between the small islands of the Plumpers—C.Helbig

There were many more beauty spots, like our sunny beach on Owl Island, the intricate passageways around Fire Island, and the treasures found everywhere along the intertidal zone. The bright red sea urchins are gorgeous and we discovered that they also make a tasty raw snack. The yellowy-orange hued innards have the consistency of lightly cooked crab with a creamy-salty taste that was milder than I expected. It’s actually the creature’s gonads that you’re eating. 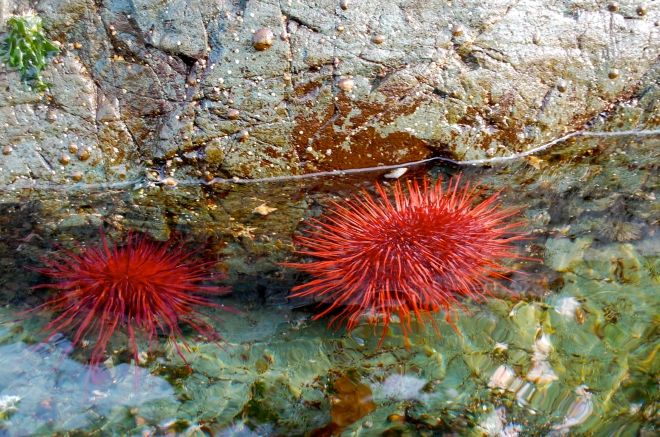 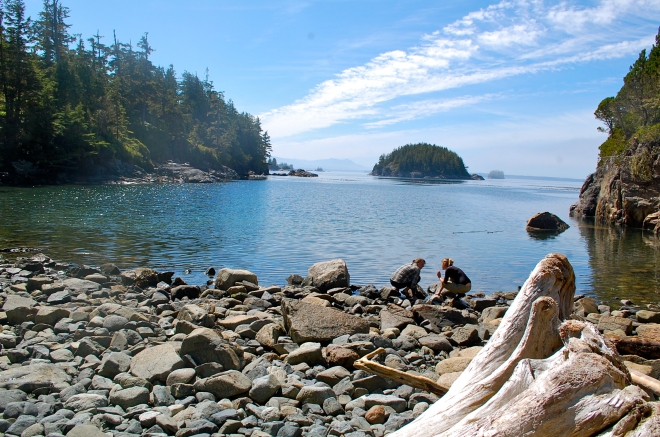 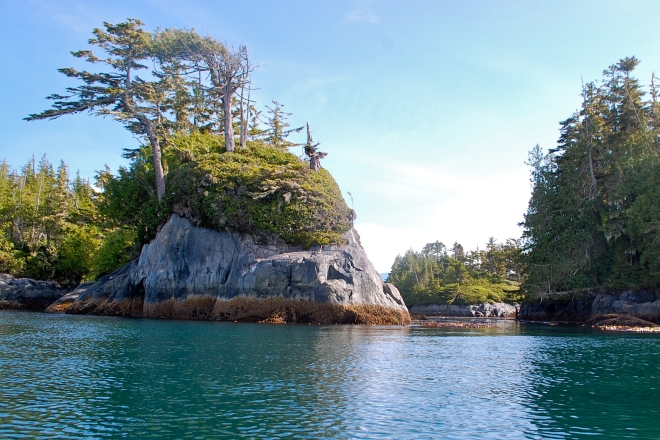 I feel very privileged to have experienced a small part of the Broughton Archipelago Marine Park and the majesty of the wildlife that make it their home. My travel companions were a wonderfully eclectic group who greatly added to my enjoyment of the trip. Spirit of the West is a top-notch outfit who provides exceptional guiding, and adheres to high environmental standards (did I mention the great food!). Although not that far from my home in Vancouver, the Broughton Archipelago feels very far away. It is a special place.

I returned to the Broughtons with my husband the following year for another great tour with Spirit of the West Adventures. Check out my updated post here.

14 thoughts on “Kayaking with the Whales: Broughton Archipelago, British Columbia”