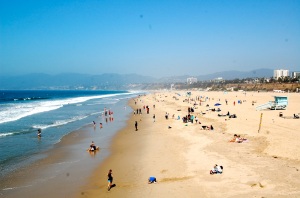 My son Alex turned 16 in March and we decided to give him more say in the “where to go during Spring Break” decision. I gave him lots of great options, hoping he’d pick a place like Morocco or Borneo. But no, he was set on Southern California; specifically Los Angeles. I can understand the allure for a 16 year old boy—beaches, babes, movie stars, and Mexican food (not necessarily in that order). So much for exposing him to exotic cultures, unless Venice Beach counts! To my dismay and delight, it turned out to be his “best trip ever”, and his parents had a pretty good time too.

What’s on the hit list for a 16 year old boy visiting LA? 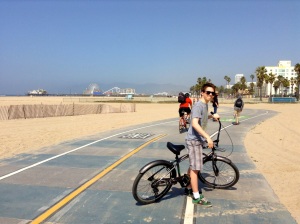 Staying near the beach: I managed to find a fabulous, reasonably priced Flipkey rental in Marina del Rey. The one bedroom with full kitchen and living room, in a trendy residential neighbourhood, was just a block from the beach. We were close enough to walk to Venice Beach and all sorts of great restaurants and cafes. Alex decided he wants to live there when he moves out!

Renting a bike: Bike rental places abound along the South Bay Bike Trail—a 22mile/35km paved trail running north toward Malibu and south to Torrance. Rent one for the day and ride to Santa Monica and beyond. Check out Muscle Beach, visit the famous Santa Monica pier, watch the surfers, skateboarders, volleyball players, and take in the everyday sights and sounds of SoCal.

Getting tickets to a live show at Warner Bros. Studio: I achieved supermom status when I told Alex we were going to a live taping of Conan O’Brien. Free tickets for shows like Conan or Ellen are in high demand, but attainable if you diligently check online calendars for ticket availability. Seeing Conan live was hugely entertaining. Combine this with a morning tour of Warner Brothers Studio, for a behind the scenes look at a real working studio.

Seeing Hollywood/Beverly Hills: Many visitors take a bus or van tour through Hollywood and Beverly Hills. We opted for a bike tour with Scott, the wildly enthusiastic owner of Bike Tours Hollywood. Scott kept us entertained as we biked along  Hollywood Blvd. and the Sunset Strip, stopping on route to hear stories about famous clubs like the Whiskey a Go Go and the Viper Room. We pedaled through gorgeous Beverly Hills, ogling at celebrity homes while listening to tunes from a speaker hooked up to Scott’s bike. It was a crazy, fun experience and Alex thought Scott was about the coolest guy he’d ever met. 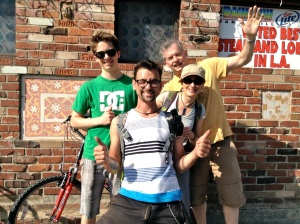 Outside the Rainbow Room on Sunset Strip with Scott

Visit Universal Studios: Yes, it is expensive; yes, it is crowded. But, it was a whole lot of fun. We especially enjoyed the shows, and the backstage studio tour with its amazing special effects. We bought a “front of line pass” that gives visitors one-time priority access  for rides and shows. It was worth the hefty price tag during busy Spring Break. Don’t bother buying the pass in advance; check out the crowd situation first and if needed, buy it on site.

Watching a hockey game at Staples Centre: This may not be every 16 year old’s cup of tea, but it was a hit with a hockey obsessed Canadian kid. Our home team, the Vancouver Canucks, happened to be in LA during our visit. Check out the LA Kings home schedule. Bonus for parents: ticket prices are far more reasonable than in Vancouver.

Eating: We had Mexican food coming out our ears. Alex was in heaven. Little did he know beforehand that he’d also enjoy the hipster restaurants around Abbott Kinney. The icing on the cake was spotting Cameron Diaz, a few tables away. Alex could barely get the gourmet pasta to his mouth.

He’d had his fun—five days in LA. Now it was mom and dad’s picks—a leisurely drive down the coast to visit San Diego, and an inland jaunt to hike in Anza-Borrego State Park. Our two week Spring Break in SoCal turned out to be a huge hit for the whole family.